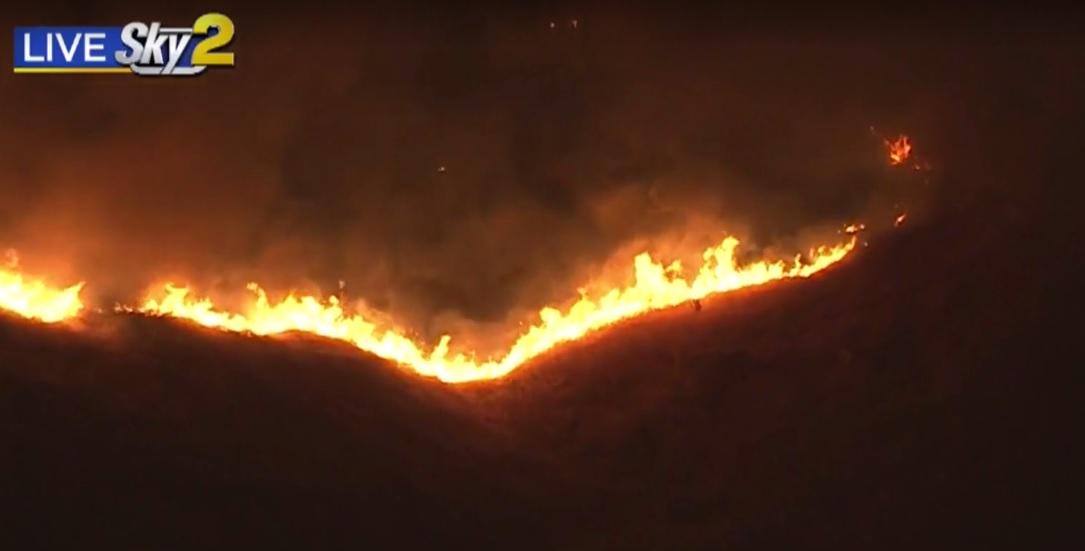 HIGHGROVE, Calif. -- Dozens of firefighters were battling a brush fire that broke out in the Highgrove community of Riverside County Sunday afternoon and was spreading rapidly, threatening several homes, according to CBS Los Angeles.

According to the Riverside County Fire Department, the blaze, dubbed the Opera Fire, was reported at 3:43 p.m. near East Palmyrita Avenue and Opera Loop.

The fire was initially reported at around 30 acres in size. However, by 9:50 p.m. local time, it had grown to 1,350 acres and was 25 percent contained, the fire department said. It was moving rapidly from north to south. Crews were burning back fires in attempt to get fuel out of the way of the advancing blaze. Dry brush and wind helped accelerate the burn.

About 40 homes were threatened, but no evacuation orders had been issued.

Longtime Riverside County resident Theresa Tomlinson said she was at church when she saw the flames coming towards her.

"You could see the flames there, right behind the homes," Tomlinson told CBS Los Angeles.

The fire department reported that drones flying in the area were hampering the firefighting effort. They were asking those people to ground their drones immediately.

Instagram user @rdc4it posted this video from a drone near the scene:

This is a developing story. Please refresh for the latest updates.