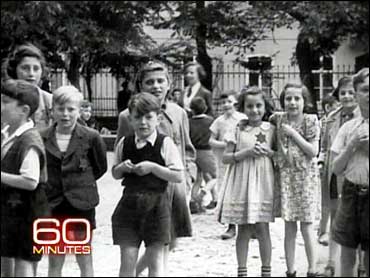 How did the Nazis manage to kill six million Jews and keep so much of the world in the dark? Part of the answer can be found when looking at the history of a concentration camp called Theresienstadt, in what was Czechoslovakia. Near the end of the war, the Nazis used the camp to con the world.

Reports had begun circulating in allied capitals that the Nazis were exterminating Jews. The Nazis wanted to refute those reports, so they took this one camp and turned it, if ever so briefly, into a model town. They shot a movie there to prove how good they treated the Jews and invited the Red Cross to inspect it.

Central to the deception was the performance of a children's opera called "Brundibar." The opera survived the war and so did a few members of its cast. They are in their mid-70s now and a few months ago, they invited 60 Minutes correspondent Bob Simon to spend some time with them.


Every summer, a remarkable reunion takes place in the Czech Republic. A group of friends come together from all over the world, who all have one thing in common: they grew up in the shadow of death in a concentration camp in the lush mountains outside of Prague. They grew up quickly.

Helga Kinsky couldn't speak about the horror for a full 40 years. "Because actually whatever you did, you didn't have the right to live. You were sentenced to death. And it is something you can't get over," she explains.

The survivors' friendship began in Theresienstadt, a transit camp. From here, a garrison town before the war, Jews were sent off to the gas chambers of Auschwitz. Nearly 140,000 Jews from all over central Europe passed through the camp, including many of Europe's most prominent artists who left a record of what it was like. Much of the art has survived, some of it by children. They portrayed how cold and crowded they were, sleeping 30 to a room, how typhus epidemics swept through the camp. The dead were brought to catacombs before being incinerated. Bodies were carried on the same wagons used for bread. Jews weren't gassed at Theresienstadt but more than 30,000 died of disease and hunger.

Music flourished in the camp—it was like a Julliard for Jews. There were classes and concerts in cellars and attics. The hottest ticket in town was Brundibar, written by a Czech Jew and smuggled into the camp.

"It wasn't easy to get tickets," remembers Dita Krause, who was in the choir in Brundibar. She says tickets were printed for every performance and were maybe the most difficult to get.

The opera was performed 55 times by children in Theresienstadt. It's a fairy tale of sorts, the story of a young brother and sister who with the help of a cat, a dog, a bird and the children of the village defeat an evil organ grinder named Brundibar. The opera ends with a victory song.

Back in the camp, the Nazis filmed the performance in 1944. The lead role, the part of Brundibar, was played by a boy named Honza Treichlinger, who wore a fake mustache.

"Everybody loved him. And everybody adored him," remembers Ella Weissberger, who played the cat.

"I wore my sisters ski pants and my mothers sweater. Black sweater, this was my costume," she recalls.

Wearing a costume was a relief from what Ella and the other kids had to wear all the time in the camp. "This was the only time that they said we don't have to put on the Jewish star. A couple of minutes of freedom," she explains.

A couple of minutes of freedom for Ella the cat.
"All I can hear and see is Ella, never stopping to sing the cat. So we all sang the cat in the end," remembers Eva Gross, who was 20 at the time. She taught the children.

"It was lovely this was very nice, very liberating. Very—and of course the whole—not only the whole room, the whole house, the whole town sang the victory song afterwards," Gross remembers.

"Oh, yes, they knew exactly the symbolic meaning. I'm sure they did. The whole thing was of course symbolic, you know? Brundibar was Hitler. So, oh yes, they knew," says Gross.

"It was our way to fight the evil. The Germans, maybe," says Handa Drori, who was a member of the chorus. Once, she got a chance to play the dog.

Brundibar is a story of defiance.

Asked if the Germans didn't realize that or whether they worried about it, Drori tells Simon, "Yeah that what we wondered all the time. If they don't understand that what we are singing is against them. If they don't understand it. Or if they just don't care, because they knew what we didn't know. That we are meant all to go to the gas chambers and to die, not to survive. Maybe they thought, 'Ah let the Jews play a little bit before they go to be, to be killed.'"

But by 1944 reports were circulating in allied capitals that Jews were being deported and exterminated.

The Nazis wanted to refute those reports and decided on an audacious deception: to make Theresienstadt look like a model Jewish town and to invite in the International Red Cross for an inspection and to make a propaganda film showing what a nice place it was.

A beautification plan was implemented immediately. They painted buildings, planted flowers, opened stores, and put up a bandstand in the town square.

They built a kindergarten in a small park, near our children's home. They opened a coffee shop. And those chose the people who sit there. And listen to music, and drink their coffee. Usually young, pretty women. They made Terezin into a beautiful, little place," remembers Helga Kinsky, who watched it all unfold.

And they made it a lot less crowded. Just before the Red Cross delegation arrived, the Nazis shipped 7,500 people off to Auschwitz, creating more open spaces. The stage was now set. On June 23rd, 1944, the Red Cross delegates came for their one day visit and the show began. The Nazis decided that a performance of Brundibar would be the highlight.

Paul Sandfort was in the orchestra that day and played the trumpet.

Asked what that particular performance was like, Sandfort tells Simon, "It was a little more tense. A little more tense because we had to…this feeling of…I at least has the feeling you must not fail. You must play for your life."

The Red Cross delegates went exactly where the Nazis took them. They didn't question a single prisoner. They saw no evil, they heard no evil. In fact, the Swiss head of the delegation took pictures to show how happy the children looked.

The deception worked. The final report of the Red Cross delegation read that Theresienstadt looks like a normal provincial town where and the "elegantly dressed women all had silk stockings scarves and stylish handbags." The delegates also wrote that Theresienstadt is a final destination camp and that people who come here are not sent elsewhere.

In fact by the time of the visit, some 68,000 people had already been shipped from here to the death camps.

Sandfort acknowledges the Nazis did convince the world. "But they only convinced the world because the world wanted to be convinced. It's easier."
When the show was over, the transports to Auschwitz were accelerated.
Those who stayed behind, like Ella Weissberger, watched as their friends and fellow cast members were herded onto the trains.

"So I tell you the truth, when we were saying the last goodbye to some I can't say it today. I said, 'But I will see you later. I don't wanna say goodbye,'" she says.

As the trains kept on heading to Auschwitz, the cast of Brundibar kept on changing. Ella's co-star Honza Treichlinger, the young boy who played Brundibar, was sent to the gas chambers in 1944. The opera's composer, Hans Krasa, was killed about the same time.

For those who stayed in Theresienstadt it meant learning new parts all the time, which wasn't a problem because everyone knew the opera by heart. But by the end of 1944, performances stopped abruptly because there was hardly anyone left.

Dita Krause was 12 when she was bundled onto a train to Auschwitz. "For me the Holocaust started after Terezin. Terezin was still acceptable compared to what was after. The day we left Terezin, the world changed totally, radically," she explains.

Like very few other cast members of Brundibar, Dita survived Auschwitz and Bergen Belsen, but she lost her entire family and almost all her friends. "So few of them survived. And they were so talented. So many wonderful children among them, and promising children. That's the pity of it. Children that would have become poets and artists, and so many of them. And they are all gone, for nothing," she tells Simon.

The cast members of Brundibar who did survive get together every year now. This past autumn they walked around Theresienstadt, that old concentration camp, which is now a provincial town again.

Children from all over the world perform Brundibar these days, this fairy tale set to music. Children from a nearby Czech school put on a performance for members of the original cast in the same Theresienstadt attic where they first performed it more than 60 years ago.

The girls, as they still call themselves, remembered their lines. The schoolchildren invited them to join in the finale, the victory song. They stole the show.
Produced By Paul Bellinger and Michael Gavshon