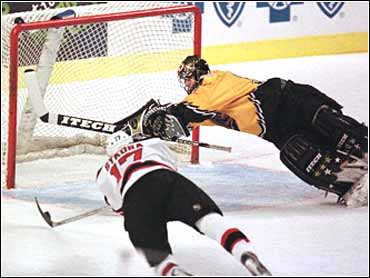 Sergei Samsonov scored two goals, including the game-winner 1:14 into overtime, to lift the Boston Bruins to a 4-3 victory over the New Jersey Devils on Saturday night.

The Devils, who blew a late 3-2 lead, lost back-to-back games for the first time since December 7-9.

Samsonov scored his 20th goal of the season when he converted Joe Thornton's pass from behind the net and slid the puck through Martin Brodeur's pads.

The Bruins tied it 3-3 with 4:22 remaining in regulation when Samsonov spun defenseman Brian Rafalski around in front of the net, and slid the puck past Brodeur.

The Bruins erased three deficits, and have beaten the Devils twice in the last six games.

Jason Arnott gave the Devils a 3-2 lead when he slid the puck past Byron Dafoe at 5:28 of the third.

The Devils took a 1-0 lead when Petr Sykora rebounded Mike Commodore's slap shot and flipped a shot over Dafoe as he was falling to the ice at 13:18 of the first.

Sykora has four goals and four assists in his last five games.

The Bruins tied it with a short-handed goal by Thornton at 18:36. Thornton trailed Brian Rolton on a 2-on-0 breakaway and after Brodeur made the initial save, he flipped the puck past him for his 16th goal.

New Jersey regained the lead when Sergei Brylin came out of the penalty box and beat Dafoe on a breakaway at 15:21 of the second period.

Just over a minute later, Dixon Ward scored on a rebound of Mikko Eloranta's shot to tie it 2-2.

Devils leading scorer Alexander Mogilny had his three-game goal scoring streak snapped and was held scoreless for only the third time in the last 11 games.

Scott Niedermayer had two assists for the Devils, who are 4-2-3 in their last nine games in Boston.

Kyle McLaren had two assists for the Bruins, who have only allowed nine goals in the last five games.

Commodore notched his first career assist and also has one goal in 14 games this season for the Devils.