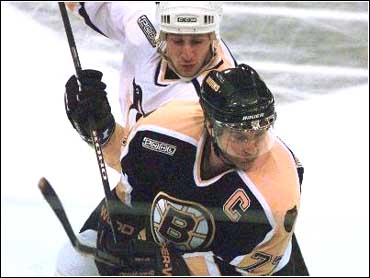 Ho hum. Another night, another tie for the Boston Bruins. For the Pittsburgh Penguins, it was yet another winless night without star Jaromir Jagr.

The Bruins killed off a Pittsburgh power play during the final 1:14 of overtime after getting a goal from rookie Cameron Mann early in the third period to tie the Penguins 2-2 on Saturday night.

The tie was Boston's NHL-leading 17th and left the Bruins (19-26-17) with only two more victories than ties. They were 0-4-2 in their previous six games before ending Washington's 10-game home winning streak with a 3-0 decision Friday.

The Penguins are in an 0-3-1 slump and are 1-5-2 without Jagr, the NHL scoring leader who remains hospitalized after having a pool of blood surgically removed his left thigh Friday.

Jagr's return is uncertain, and Penguins general manager Craig Patrick admits to being concerned that complications from the injury could further delay the recovery. Jagr has missed the last three games and was scoreless in the three games before that.

Pittsburgh had a chance to win after Dave Andreychuk was called for holding Martin Straka a call disputed by Bruins coach Pat Bruins but the Penguins did not have any strong scoring chances after that.

"It was a cheap call in my book," said Burns, who waved his hand in disgust at referee Dave Jackson's call.

The Penguins moved one point ahead of the New York Rangers for seventh place in the Eastern Conference but, with Jagr unlikely to play in the near future, are in danger of missing the playoffs for the first time in 10 years.

Pittsburgh los to Philadelphia in the final nine seconds of overtime Thursday.

"You're never happy with a tie, but I'm glad we didn't lose," said the Penguins' Tyler Wright, who scored his eighth goal. "Every point is critical right now with him (Jagr) out of the lineup."

Boston took the initial lead as Sergei Samsonov's wrist shot from the left circle eluded goalie Jean-Sebastien Aubin at 9:31 of the first. Aubin turned aside 25 of 27 shots.

But, unlike Friday when the Capitals put 49 shots on goal, the Bruins weren't able to maintain their early offensive momentum and had only 14 shots by the end of the second period before finishing with 27.

"I was getting a little worried in the second period, we were backing off and I was pleading with them to keep on pressing," Burns said.

Pittsburgh's Pat Falloon tied it at 13:37 of the second, skating into the slot to put a rebound of Brad Werenka's slap shot by John Grahame, who made 32 saves in his second strong performance in as many nights.

"I think we played a pretty good game, but their goaltender played well, too," Aubin said. "Every point is important right now."

The Penguins took their first lead on Wright's goal at 3:11 of the third. Rob Brown forced a turnover in the Bruins' end, allowing Wright to power a slap shot off Grahame's right shoulder and into the net.

"Their third-line guys, they were all over us," Burns said.

But the lead lasted barely a minute. Mann tied it at 4:14 with his second goal since being recalled from the minors Feb. 3, putting in a rebound of Shawn Bates' backhander off a faceoff.

"They're a good offensive team, you let them move around and they're going to get chances and they did," Andreychuk said. "Our goaltender played very well. I think we have to be pretty satisfied with this, coming in here and playing back-to-back games like this."