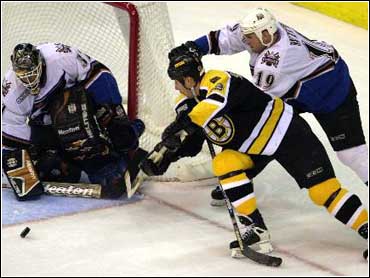 The Bruins managed 51 shots the last time they played the Capitals and got nothing more than a tie. When Boston took a mere 49 shots at Washington's net Friday night, it was enough.

Thanks to John Grahame, who made 21 saves, and goals from Ray Bourque, Sergei Samsonov and P.J. Axelsson, the Bruins won 3-0, handing the Capitals their first home loss in more than two months.

The Bruins outshot the Capitals 51-15, but tied 2-2 earlier this month. They held a 49-21 advantage over Washington this time, and Grahame had a big night as Boston ended its six-game winless streak.

The injury-riddled Bruins kept the pressure on throughout, despite missing scoring threats Jason Allison and Anson Carter and starting goalie Byron Dafoe. Grahame's saves kept the Bruins in charge.

"I just tried to make some saves for the team to get a big win here," Grahame said. "A goalie can change the tide of a game."

Grahame did that with a number of tough stops. The Capitals came up with several scoring chances,but couldn't connect.

"Tonight, Grahame had a great effort," Boston's Steve Heinze said after playing in his 500th NHL game. "That gives the team a boost."

Boston helped by pressuring the Capitals throughout. The Bruins had a 21-shot second period and forced Washingto goalie Olaf Kolzig to make 33 saves before coach Ron Wilson replaced him with Craig Billington when the third period began.

Samsonov scored with 16 seconds left in the first period, re-directing Bourque's slap shot past Kolzig on a power play.

The Bruins made it 2-0 when Axelsson's shot from the side bounced off Kolzig's leg pad and into the net with 3:35 left in the second period. Bourque added an empty-net score with two minutes left.

Penalties hurt Washington the entire game. The Capitals were called for nine, while Boston got just three. When Brendan Witt was called for slashing late in the third period. Wilson became enraged and began waving a white towel for several seconds before throwing it on to the ice.

A visibly angered Wilson then berated referee Lance Roberts in front of the Capitals bench before drawing a bench minor. Chris Simon already was in the box at the time, but Washington killed off the penalites.

Injuries also prevented the Capitals from doing that. A concussion sidelined Richard Zednik, and Peter Bondra injured his jaw 39 seconds into his first shift and never returned. He's listed as day-to-day.