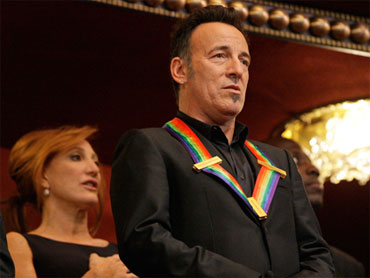 (AP Photo/Alex Brandon)
Adding his voice to the contentious debate on gay marriage, native New Jersey resident Bruce Springsteen called for lawmakers in his state to pass the measure. The State Senate will vote on it tomorrow.

"I've long believed in and have always spoken out for the rights of same-sex couples," the musician wrote on his website.

Springsteen is no stranger to politics, having performed for the presidential campaigns of John Kerry and Barack Obama. He also expressed support for outgoing Democratic governor Jon Corzine, who describes the recognition of gay marriage as a "civil rights issue that must be approved to assure that every citizen is treated equally under the law."

Corzine's successor, Republican Chris Christie, has said he would veto gay marriage if it passes the legislature. Supporters of the bill hope to see the bill passed before Christie takes office on January 19th, seeing it as a much-needed victory after losses in the New York State senate last week and a referendum in Maine last month.

While Christie considers himself a diehard Springsteen fan, having attended 122 concerts to date, his position on gay marriage may be keeping him apart from his rock idol. The New York Times reports that Christie's request to have Springsteen perform at a benefit concert ahead of his inauguration was rejected.

A Springsteen cover band will instead perform for the governor-elect.