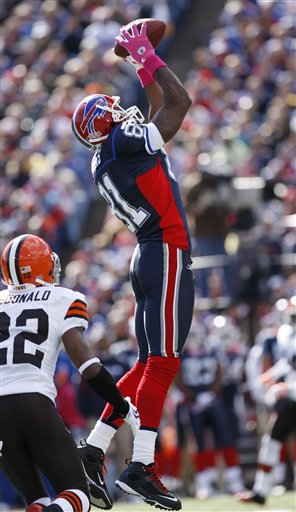 Cundiff's kick ended a display of offensive ineptitude between the Browns and Bills in a how-bad-was-it game.

Cundiff also made a 24-yard field goal in the second quarter, while punter Dave Zastudil was the Browns' MVP. Zastudil downed seven of nine punts inside the Bills 20, including three inside the 5. Zastudil also provided the game-turning play when Roscoe Parrish muffed a rolling punt. The Browns recovered at the Bills 16 to set up the winning score.

The Bills (1-4) have lost to winless teams in consecutive weeks following a 38-10 defeat at Miami.

They've dropped 12 of their past 15, and coach Dick Jauron's seat keeps getting hotter after the Bills had their third straight 7-9 finish last season.

The Browns ended a 10-game losing streak, one short of matching a franchise worst. The Browns' last win also came at Buffalo, a 29-27 victory Nov. 17 that was sealed by Phil Dawson's 56-yard field goal in the final two minutes. Dawson was unable to play Sunday because of a calf injury.

The game was a comedy of errors and lived down to its billing as a Misery Loves Company Bowl between two of the NFL's worst offenses.

Cleveland's Derek Anderson went 2 of 17 for a mere 23 yards and an interception to register a 15.1 passer rating in his second straight start. The Browns managed nine first downs and 193 yards of offense. They were led by Jamal Lewis, who had 117 yards rushing on 31 carries in his first game back after missing two with a hamstring injury.

Thanks to Zastudil, the Bills had two drives start at their 1-yard line and another at the 4.

Then came the turning point, when Zastudil smartly elected not to use the wind at his back. Instead, he pooched a short kick that landed 20 yards in front of Parrish, who was waiting at his 20. Rather than allowing the ball to roll past him, Parrish attempted to pick it up, but missed.

Former Bills linebacker Blake Costanzo was right on top of Parrish and dived on the loose ball. After Lewis was stopped inches short of the goal line on third-and-goal from the 3, Cundiff easily split the uprights.

Rian Lindell hit a 36-yard field goal that tied the game 5 minutes into the third quarter.

The Bills' problem was penalties. Buffalo was flagged 13 times for 75 yards _ including a whopping nine false-start violations.

Linebacker Marcus Buggs was penalized for jumping the snap to sack Anderson on a third-and-7. On the next play, Joshua Cribbs had a 31-yard gain to set up Cundiff's 24-yard field goal that opened the scoring.

Injuries also plagued the Bills, who had starting middle linebacker Kawika Mitchell and Mitchell's backup, Buggs, carted off the field with leg injuries.

Numerous others were wounded. Police say it appears the gunman took his own life.