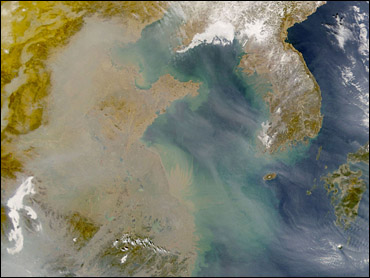 The "Asian Brown Cloud," a 2-mile-thick blanket of pollution over South Asia, may be causing the premature deaths of a half-million people in India each year, deadly flooding in some areas and drought in others, according to the biggest-ever scientific study of the phenomenon.

The grimy cocktail of ash, soot, acids and other damaging airborne particles is as much the result of low-tech polluters like wood- and dung-burning stoves, cooking fires and forest clearing as it is of dirty industries, the U.N.-sponsored study found.

"When you think about air pollution, many people think of industry and fossil fuels as the only causes," report co-author Paul Crutzen, a scientist at the Max-Planck Institute for Chemistry in Mainz, Germany, told a news conference in London.

Often ignored, he said, was "biomass burning," including forest fires and the burning of vegetation to clear land or to warm the homes of poor people.

More than 200 scientists contributed to the study, overseen by the U.N. Environment Program in preparation for the World Summit on sustainable Development opening Aug. 26 in Johannesburg, South Africa. They used data from ships, planes and satellites to study Asia's haze from 1995 to 2000.

The scientists say more research is needed but that some trends are clear. Respiratory illness appears to be increasing along with the pollution in densely populated South Asia, with one study suggesting the 500,000 premature deaths annually in India.

The dense cloud of pollution — also caused by auto emissions, factories and waste incineration — cuts the amount of sunlight reaching the ground and the oceans by 10 to 15 percent, cooling the land and water while heating the atmosphere.

That phenomenon appears to have altered the region's monsoon rains — increasing rainfall and flooding in Bangladesh, Nepal and northeastern India, while cutting back needed seasonal precipitation in Pakistan and northwestern India.

Floods, drought, sunlight reduction and acid rain all can hurt agricultural yields, with the report indicating the pollution may be cutting India's winter rice harvest by as much as 10 percent.

Veerabhadran Ramanathan of the Scripps Institution of Oceanography in La Jolla, Calif., one of the report's authors, said the extent of the sunlight loss was "a major surprise."

Scientists say it's too early to draw definite conclusions about the impact of the cloud, and of similar hazes over East Asia, South America and Africa.

"We need much more basic scientific data to be able to establish what are the consequences for human health and the environment," said co-author Crutzen, co-winner of the 1995 Nobel chemistry prize for his work on the ozone layer.

But they warn the impact could be global since prevailing winds push pollution clouds halfway round the world in just a week's time.

For many years, scientists believed only lighter greenhouse gases — such as carbon dioxide that is produced from burning fossil fuels such as gasoline and oil — were global in reach and effect.

It's unclear what the haze's relationship is to global warming, which most scientists believe is caused by the emission of greenhouse gases that trap the Earth's heat. The pollution cloud appears to cool the area below by blocking sunlight.

Klaus Toepfer, executive director of the U.N. Environment Program, said scientists and policy-makers ``should avoid making premature final assessments," but should start trying to cut pollution by introducing more efficient heating stoves in developing countries and turning to solar power and other clean sources of energy.

The environmental group Friends of the Earth said "urgent action is desperately needed to tackle the causes behind this huge toxic cloud."

"Actions must include phasing out fossil fuels and replacing them with clean, green, renewable energy, and tough laws to protect the world's forests," said the group's climate coordinator, Kate Hampton.

Ramanathan said the surprises found by the study will drive scientists to keep studying human impact on the environment.

"We've been looking at environmental issues for the last several decades, yet the Asian haze came as a major surprise to us," he said. "We don't know how many more surprises we will find."