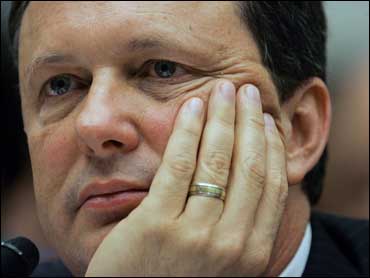 E-mails sent by Brown during and immediately after Hurricane Katrina hit the Gulf Coast reveal that he was looking for a dog sitter, chatting about shopping and showing concern about his appearance during the tumultuous time.

A House panel investigating the government's sluggish response to the storm has released 23 pages of internal e-mail from the time Katrina hit. The e-mails could bring more criticism to Brown, who has already been removed from his post after being denounced by lawmakers for his handling of Hurricane Katrina.

In one e-mail, sent on Aug. 29 as Katrina was pummeling the Gulf, a FEMA public affairs official tells Brown the outfit he wore on a television appearance looked "fabulous," to which Brown replies, "I got it at Nordstroms," then adds, "Are you proud of me? Can I quit now? Can I go home?"

CBS News correspondent Bob Orr reports that an hour later, as thousands of evacuees huddled in the Superdome "shelter of last resort," Brown fired off another email: "If you'll look at my lovely FEMA attire you'll really vomit. I ama fashion god." (sic)

And after the levees failed and the situation grew even more desperate, FEMA's point man in New Oreans pleaded for Brown to send more help.
"... you know the situation is past critical," wrote Marty Bahamonde. "Estimates are many will die within hours."

Just four minutes later Brown wrote back a light message: "Thanks for the update. Anything specific I need to do or tweak?"

In another, an aide reminds Brown to pay heed to his image on TV, suggesting that he roll up his sleeves.

By Sept. 2, Brown expressed inundation with the disaster response. He wrote to a GOP consultant who had requested a meeting, "I'm trapped now! Please rescue me!"

The following day, Brown wrote to a fellow FEMA employee: "I feel like I'm getting the s--t beat out of me …"

In response to an e-mail with a subject reading "U ok?" Brown wrote on Aug. 30, "I'm not answering that question." But he did ask the fellow FEMA employee if he knew of a good dog sitter or even "any responsible kids."

Some lawmakers immediately decried the e-mails. Louisiana Democrat Charlie Melancon say they "depict a leader who seemed overwhelmed and rarely made key decisions."
Brown, who resigned under fire Sept. 12, 2005, after being heavily criticized for the federal government's slow reaction to the hurricane, has said he will remain employed by the FEMA to help the agency complete its review of the response to Hurricane Katrina. He said he would also be reviewing for the agency a large number of Freedom of Information requests dealing with the response.

Asked in a telephone interview if he expects to complete that work by the end of his second 30-day extension, Brown replied, "Absolutely. I'm motivated to wrap it up. I'm ready to move on."

Brown resigned three days after Homeland Security Secretary Michael Chertoff relieved him of his onsite command of FEMA's response to Katrina. The storm killed more than 1,200 people along the Gulf Coast, flooded New Orleans and forced the evacuation of hundreds of thousands. R. David Paulison was named acting director.

"Biggest issue: resources are far exceeded by requirements," wrote William Carwile, the top Federal Emergency Management Agency official in Mississippi in a Sept. 3 e-mail to a state official. "Getting less than 25 percent of what we have been requesting from HQ daily."

In other released internal FEMA e-mails, Marty Bahamonde, the first FEMA official to arrive in New Orleans in advance of the Aug. 29 storm, sent a dire e-mail warning to Brown saying victims had no food and were dying.

No response came from Brown. Instead, less than three hours later, an aide to Brown sent an e-mail saying her boss wanted to go on a television program that night but first would need at least an hour to eat dinner at a Baton Rouge restaurant.

Bahamonde, who sent the e-mail to Brown two days after the storm struck, said the e-mails illustrate the government's failure to grasp what was happening. Click here to read the e-mails (PDF).

"There was a systematic failure at all levels of government to understand the magnitude of the situation," Bahamonde testified. "The leadership from top down in our agency is unprepared and out of touch."