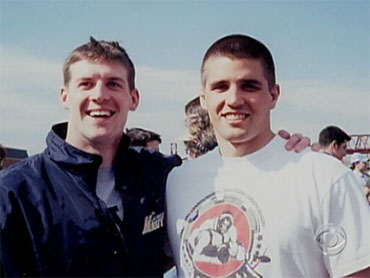 Travis Manion and Brendan Looney were roommates at the Naval Academy, close as brothers. One became a Marine and went to Iraq, the other a Navy Seal in Afghanistan. On Monday they were reunited, side-by-side in Arlington National cemetery, reports CBS News correspondent David Martin.

"That's what kinda gets me by is knowing that they're going to be together," said Looney's wife, Amy.

The grief is still raw for Amy, and for Looney's mother Maureen. It's been less than two weeks since his body came home from Afghanistan, where he was killed in a helicopter crash.

"After we got the call and everything, actually Mrs. Manion was the first person I called because she was like Brendan's other mom," said Maureen.

Travis Manion's parents have been living with their grief for more than three years. He was shot by a sniper in Iraq in 2007. Six months later, Brendan was still overcome talking about what Travis meant to him.

"I was lucky enough to room with Travis at the Naval Academy for two years," said Brendan in October 2007. "In a very short time he became another brother to me. He was a great friend. I'll never forget him and I miss him."

Travis had been laid to rest in the family cemetery near Philadelphia, but when Brendan died both families instantly knew what had to be done.

"That was the first thing out of my mouth, without even thinking," said Amy. "That they had to be together."

"I'll be at peace knowing that he's with his brother, together," said Janet. "I know that's where he wants to be."

On Friday Travis was moved to Arlington. Both families were there, the two mothers holding tight to each other. Monday they gathered again, to bury Brendan right next to Travis.

"They're together now," said Maureen. "We've got two angels looking out after us."

Travis' father, himself a former Marine, spoke their epitaph.