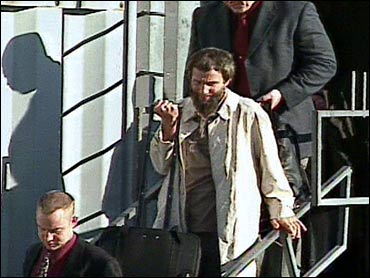 The singer formerly known as Cat Stevens is forbidden from flying into the United States because of his alleged association with possible terrorists, U.S. officials said Wednesday in explaining why a London-to-Washington flight carrying the singer was diverted.

The claim is disputed by the brother of the London-born singer, who changed his name to Yusuf Islam more than 25 years ago.

David Gordon said his brother has condemned terrorist acts and donates money to terrorism victims. "His only work, his only mindset, is humanitarian causes," said Gordon, who lives in Princeton, New Jersey, and serves as Islam's business manager. "He just wants to be an ambassador for peace."

In London, Mohammad Abdul Bari, deputy general secretary of the Muslim Council of Britain, called the incident "a slap in the face of sanity" that will damage U.S. relations with Muslims.

"If prominent, well-known personalities are treated like this, then how can there be bridge-building," said Bari, adding that Islam is a well respected member of Britain's Muslim community.

United Airlines Flight 919 was en route to Dulles International Airport on Tuesday when U.S. officials reviewing the passenger list discovered Islam was aboard. The aircraft was diverted to Maine's Bangor International Airport, where federal agents met the plane and interviewed Islam.

He was placed on a plane back to London on Wednesday. Gordon said Islam's 21-year-old daughter, Maymanah, was allowed to stay in the country.

Meantime, there was confusion about how someone on the government's "no-fly list" was allowed to board a plane. Airline personnel are supposed to check passengers' names against people on the list. Anyone who matches is to be kept off flights.

United spokesman Jeff Green said the airline followed procedures in checking Yusuf Islam's name, and it wasn't on the list.

"The information did not match," Green said.

Green and Homeland Security Department spokesman Dennis Murphy said the airline and the government are working together to figure out what happened. It is possible that Yusuf Islam's name was spelled differently on the list, Homeland Security officials conceded.

Under rules imposed following the Sept. 11 attacks, once an international flight is bound for the United States, passenger information is forwarded to U.S. officials. The amount of data varies, but can include name, address, flight details, seat location, form of payment and meal preference.

U.S. authorities use the information to run a more thorough check against government watch lists. That's when authorities discovered that Islam was on the plane.

Unlike airline workers, law enforcement officers are trained to look for names that sound like those on the watch list or are spelled differently than the ones on the watch list, Homeland Security spokesman Garrison Courtney said.

The Transportation Security Administration, which is part of the Homeland Security Department, announced plans Tuesday to take over the task of checking names against watch lists before passengers get on planes. The agency is developing a computerized system that will compare passenger data with the watch lists for domestic flights only.

Homeland Security spokesman Brian Doyle would only say that the intelligence community has recently obtained information that "further heightens concern" about Islam.

"Yusuf Islam has been placed on the watch lists because of activities that could potentially be related to terrorism," Doyle said. "It's a serious matter."

A second government official, who also spoke on condition of anonymity, said U.S. authorities think donations from Islam may have ended up helping to fund blind sheik Omar Abdel-Rahman, convicted for a plot to bomb New York City landmarks, and Hamas, a Palestinian militant group considered a terrorist organization by the United States.

In July 2000, Islam was deported hours after arriving in Jerusalem. A local paper reported then that the government claimed he had delivered tens of thousands of dollars to Hamas during a visit in 1988. Islam denied ever knowingly supporting Islamic terrorists.

The Council on American-Islamic Relations at a news conference Wednesday said the deportation "sends a message to the Islamic world that even those who seek peace and condemn terror are not fit to enter the United States."

Islam, born Stephen Georgiou, took Cat Stevens as a stage name and had a string of hits in the 1960s and '70s, including "Wild World" and "Morning Has Broken." Last year he released two songs, including a re-recording of his hit "Peace Train," to express his opposition to the U.S.-led war in Iraq.

He abandoned his music career in the late 1970s and changed his name after being persuaded by orthodox Muslim teachers that his lifestyle was forbidden by Islamic law.

He later became a teacher and an advocate for his religion, founding a Muslim school - Islamia Primary school - in London in 1983. Six years ago, it became the first Muslim school in Britain to receive government support, on the same basis as Christian and other sectarian schools.

Recently, Islam has criticized terrorist acts, including the Sept. 11 attacks and the school seizure in Beslan, Russia, earlier this month that left more than 300 dead, nearly half of them children.

In a statement on his Web site, he wrote, "Crimes against innocent bystanders taken hostage in any circumstance have no foundation whatsoever in the life of Islam and the model example of Prophet Muhammad, peace be upon him."