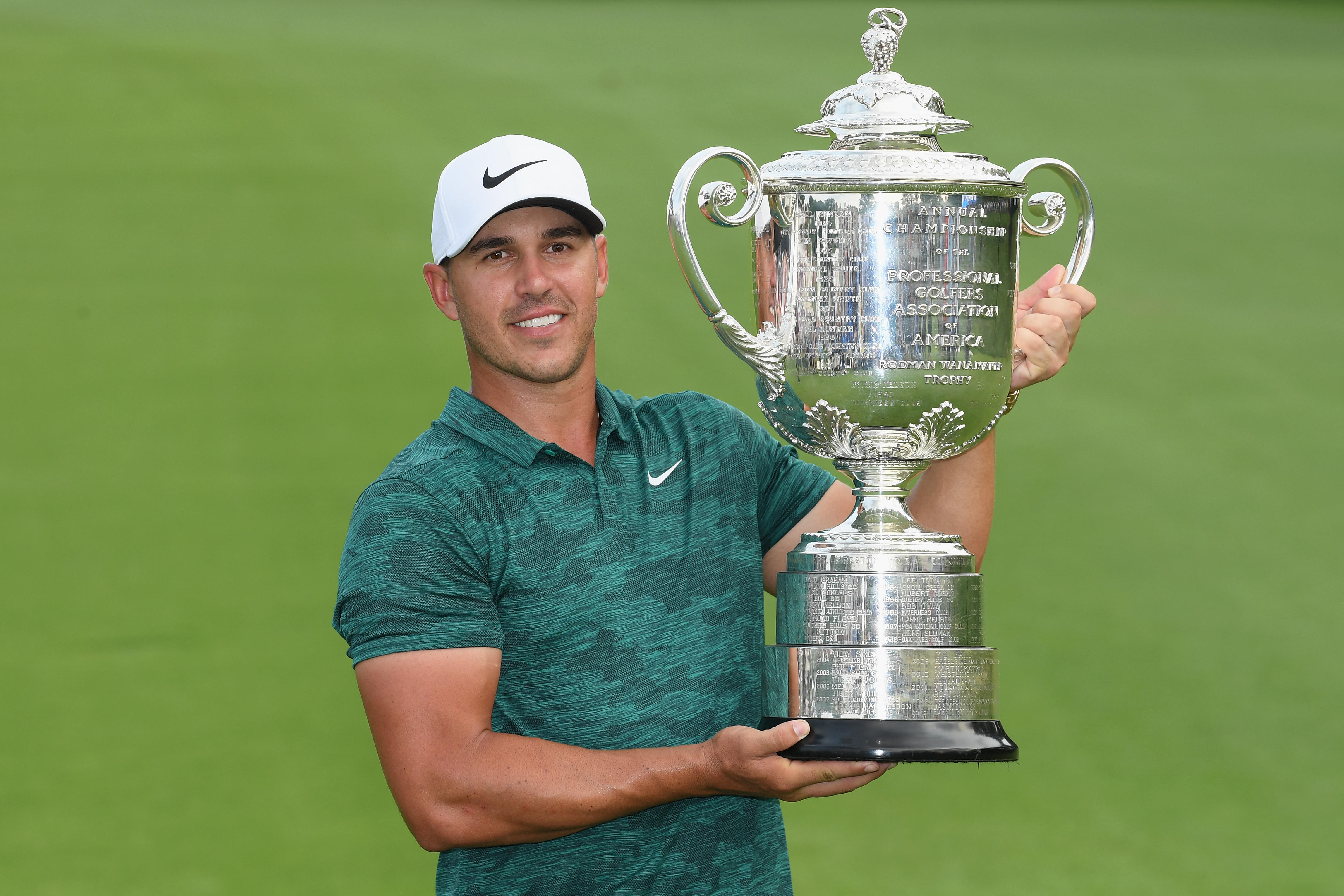 ST. LOUIS -- Brooks Koepka has won his first PGA Championship, playing poised and mistake-free golf down the stretch amid ear-splitting roars for Tiger Woods and a late charge from revitalized Adam Scott. Koepka is the fifth player to win the U.S. Open and PGA in the same year making him a three-time major champion.

"For some reason the majors gets my attention, every shot is so important," 28-year-old Koepka told CBS after receiving the Wanamaker Trophy. The West Palm Beach, Florida, native also thanked the fans who came out and cheered loudly.

"The crowds here, they let you know what's going on," he added. "The beginning of the back nine, I could hear all the roars. When Tiger started making his little run, and Scotty made his run, it got loud."

The U.S. Open champion closed with a 4-under 66 to reach 16 under for the tournament. That left Koepka three shots clear of Scott and two ahead of Woods, whose Sunday charge electrified the packed grounds of Bellerive Country Club as if it was a decade ago.

Woods capped a 6-under 64 with a long birdie putt at the 18th, pumping his fist as if he had won. It was the four-time PGA champion's lowest final round in a major.

Koepka has won three of the last six majors he played, and two of three this year alone. He joined Woods, Jack Nicklaus, Ben Hogan and Gene Sarazen as the only players to win the two U.S. majors that rotate to different courses in the same year.

He also joined Jordan Spieth, Woods, Nicklaus and Tom Watson as the only players with three majors before turning 30 since World War II.

CBSSports.com points out that when Koepka is compared to Dustin Johnson, currently the World No. 1 player, there is a tendency to favor Johnson and his 19 career wins. But Koepka has three times the number of major wins as his gym pal, and now with a PGA Championship win, his own case as one of the best golfers in the world.

With roars for Woods unheard anywhere this side of Augusta National, Koepka kept his cool and ran off two birdies on the back nine at Bellerive right after Woods closed within one shot.

"I played hard," Woods said. "I made a bit of a run. It looks like I'm going to come up a little short."

Koepka was responsible for that.

After wasting one chance to put it away, Koepka ran kept attacking flags and ran in birdie putts of 10 feet on No. 15 and 7 feet on No. 16 to end the drama. He tapped in for par on the final hole to set the PGA Championship scoring record at 264.

It also tied the major championship record that Henrik Stenson set at Royal Troon two years ago in the British Open.

Scott hung around by making big putts, just like he hoped, and was tied for the lead until Koepka's birdies. Scott missed a 6-foot birdie putt on the par-5 17th that would have pulled him to within one shot -- right after Koepka missed from the same range -- and then made bogey on the 18th for a 67 to finish alone in third.

The St. Louis fans waited 17 years to see Woods -- he last was at Bellerive when the Sept. 11 terrorist attacks canceled a World Golf Championship -- and he delivered a performance that took golf back in time.

Thomas Bjorn might have seen it coming. Earlier in the week, as he was cleaning out his locker after withdrawing with an injury, he thought back to Woods getting into contention at Carnoustie last month at the British Open. "He recognized who that guy was that day," Bjorn said.

Woods was relentless, pumping fists, raising the putter in his left hand, making birdies and charging toward a finish that caused pure pandemonium among one of the largest and noisiest crowds at a major.

Without hitting a fairway on the front nine, Woods cut the four-shot deficit to two.

Dialed in on the back nine, he dropped an approach into 4 feet on No. 12, got within one shot with a 10-foot birdie on the par-3 13th and, after a bad drive led to bogey, he answered with another approach that hit a foot from the hole.

That was as good as it got.

Facing the most important drive of the day on the par-5 17th, Woods sent it sailing to the right and it embedded in a hazard along the banks of a creek. He did well to advance it, but had to save par from a bunker. Behind him, Koepka holed his two birdie putts.

Woods and Koepka played nine holes of a practice round Wednesday, and the 14-time major champion knew what he was up against.

"It's tough to beat when the guy hits it 340 down the middle," Woods said. "What he did at Shinnecock, just bombing it, and then he's doing the same thing here. ... And when a guy's doing that and hitting it straight, and as good a putter as he is, it's tough to beat."

Koepka never imagined a year like this. He missed four months at the start of the year when a partially torn tendon in his left wrist, causing him to sit out the Masters. He outlasted good friend Dustin Johnson at Shinnecock Hills to become the first back-to-back U.S. Open champion in 29 years.

Koepka joked about working out in a public gym this week with Dustin Johnson and not being recognized. He has been motivated by more serious moments, from being left off the "notable scores" section of TV coverage at tournaments and even last week, when he was not summoned for a TV interview to preview the PGA Championship.

He now is No. 2 in the world, with a shot at overtaking Johnson in two weeks when the FedEx Cup playoffs start.

Justin Thomas also had a chance to join Woods as the only back-to-back PGA champions in stroke play, and he was tied for the lead briefly on the front nine when Koepka missed fairways and made two straight bogeys. Thomas turned birdie into bogey at the turn with a three-putt from 5 feet, and he missed a short par putt on the 14th to fall back. He shot 68 and tied for sixth.

Even with 17 players separated by three shots at one point on the front nine, everyone had to catch Koepka, Woods included.

CBS Sports captured a touching moment, seen below, as Koepka and his mother shared a hug after his victory.