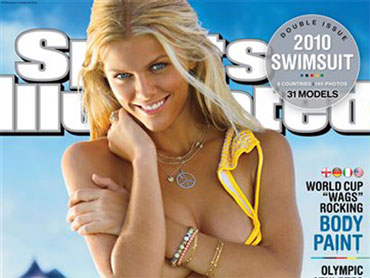 The 22-year-old wife of tennis star Andy Roddick said being chosen for the front is "the news of a lifetime."

The cover photo of Decker smiling in a yellow bikini is a departure from the more sultry look that SI had gone for the past few years, she said. She compared it to covers from the 1980s or '90s, when Elle Macpherson won her covers with a friendly, sun-loving look.

SI keeps the cover photo a secret - even from the models - until less than 24 hours before it's revealed. Decker said now the mad dash was on to find outfits for TV appearances that will come with the gig. (Her closet of swimsuits wasn't right for winter, she joked.)

As for Roddick? He's relieved the five-time SI Swimsuit model can check the cover-girl box and won't be as nervous next February when the next edition comes out.

Decker says she is an avid sports fan, and, as a teenager in North Carolina, ran hurdles for the track team, played soccer and participated in competitive cheerleading. She has no great diet or exercise secret, she said, other than to be active and eat sensibly.

"I still don't know the formula for the cover," she added. "It's luck, the perfect suit and perfect storm to get it."

Decker said, though, that because Sports Illustrated encourages a natural look - less makeup, toned muscles, curvy shape - it's easier to get a great photograph. "This celebrates the girls and their personalities. I think it's why they get such beautiful pictures."

For more with Teigen on "The Early Show," click on the video below.