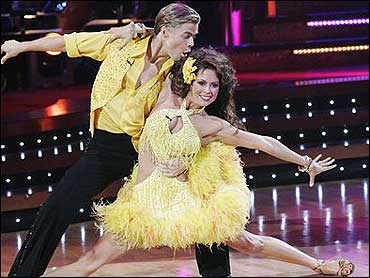 Former "Dancing With the Stars" winner Brooke Burke will be Tom Bergeron's new partner when the series starts again later this month.

She will replace Samantha Harris as co-host. Bergeron made the announcement Monday on ABC's "Good Morning America."

As a contestant, Burke won during the season that ended in November 2008. She has hosted TV shows including CBS' "Rock Star" and E!'s "Wild On." The mother of four children has also built her own business on parenting issues, with an online baby products store and job as the "mommy correspondent" on the syndicated show "The Doctors." She has more than 1.7 million followers on Twitter.

The new season begins March 22.
MMX The Associated Press. All Rights Reserved. This material may not be published, broadcast, rewritten, or redistributed