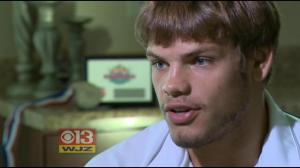 Now he's on a quest to get it back - or get it replaced.

The family had locked the medal inside their car, and awoke the next morning to find everything gone - including Brandon Ballard's medal.

"We went to the car at 7 a.m. and I looked in the back. Stuff was missing," Michael Ballard said.

"The bronze was my individual medal. That's what I earned myself. That was upsetting, especially my first one ever," the wrestler told CBS Baltimore.

Ballard, 19, who wrestled throughout high school and had just won a state championship, hopes to one day participate in the Olympics.

"In four years I will be out of college, so I am definitely going to try and make the Olympic team," Ballard said.

When he traveled to Houston for the Junior Olympics, he was glad to win the bronze.

"I lost by a point so I didn't know if I would place. When I saw my name on the paper, I was happy," Ballard said.

As for the medal that was stolen, Brandon Ballard's family is trying to see if he can get another medal, according to CBS Baltimore.

Ballard is hoping he might someday he'll replace it himself...with gold.

"That will be even better," he said.