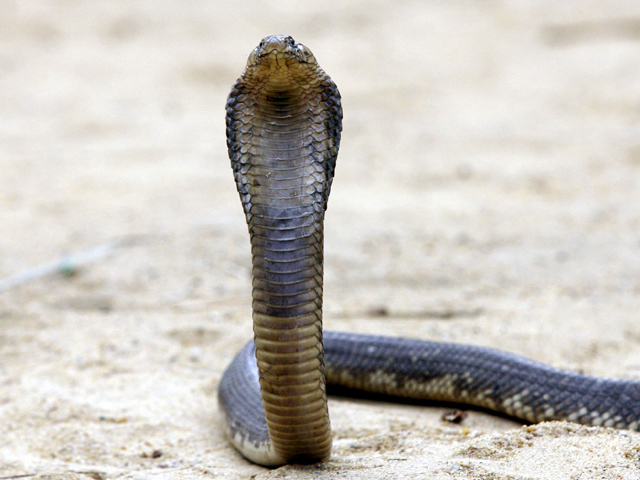 Depending upon whom you believe, a nearly two-foot-long cobra which has gone missing at the Bronx Zoo is either hiding somewhere within the Zoo's Reptile House - or living it up in the Big Apple.

On Sunday it was discovered that an adolescent Egyptian cobra has escaped from its enclosure. The 20-inch-long snake weighs less than 3 ounces. Tiny, right? Its venom, which affects the nervous system, can cause death due to respiratory failure.

Zoo officials said they are confident the snake is still within the Reptile House. Staffers are conducting daily sweeps of the premises.

Bronx Zoo Director Jim Breheny said the snake has likely sought a secure hiding spot (possibly among the pipes of the building) and, when it feels safe, will move around in search of food.

"Right now, it's the snake's game," Breheny said yesterday. "At this point, it's just like fishing; you put the hook in the water and wait. Our best strategy is patience, allowing her time to come out of hiding."

He said the process may take days, or even weeks.

But zoo staffers trying to track down the missing snake might do well to check Twitter, which is now crawling with messages from the "cobra" as it explores New York City.

Since Monday humorous Twitter posts allegedly by the snake-on-the-town have already attracted a huge fan base, with BronxZoosCobra attracting more than 28,000 followers with its escapades in the urban jungle.

"Holding very still in the snake exhibit at the Museum of Natural History. This is gonna be hilarious!"

"A lot of people are asking how I can tweet with no access to a computer or fingers. Ever heard of an iPhone? Duh."

If zoo officials are correct and it is weeks until the snake is recovered, BronxZoosCobra is bound to have a very fun spring.