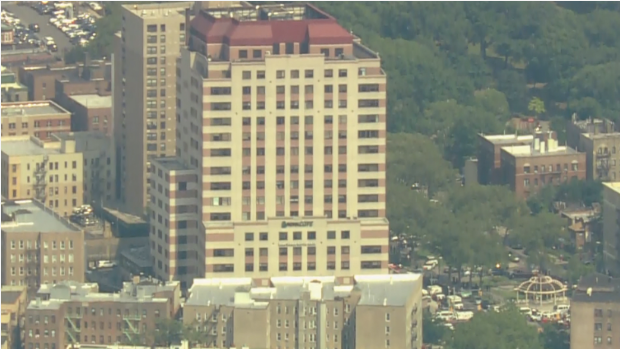 8:36 p.m. A former colleague of the doctor who opened fire at a New York City hospital where he used to work says he had been a problematic employee.

Lazala says Bello "was very aggressive, talking loudly, threatening people." He says Bello worked at night as a doctor and sent him a threatening email after Bello was fired.

On Friday, law enforcement officials say Bello walked into Bronx Lebanon Hospital on Friday in a white lab coat concealing an AR-15 assault rifle. One doctor was killed and six other people were injured.

7:44 p.m. New York Gov. Andrew Cuomo said Friday night that his thoughts and prayers are with those affected by the shooting. "We stand by to offer any assistance needed," he said on Twitter. "Thank you to the brave first responders and hospital staff who risked their lives & rushed to the scene to protect others."

7:20 p.m. In an unrelated case, Dr. Henry Bello was arrested in 2004 for allegedly groping a woman in Manhattan, CBS New York reports.

In another case, The Associated Press reports Bello was arrested again in 2009 on unlawful surveillance charges after two women accused him of trying to look up their skirts with a mirror.

7:15 p.m. CBS New York obtained an image of the shooter from his Facebook page. The suspect has been identified as Dr. Henry Bello, who was forced to resign from the hospital in 2015 after he was accused of sexual assault, officials said Friday.

6:05 p.m. Witnesses to a shooting at New York's Bronx Lebanon Hospital are describing chaos and panic as they barricaded themselves inside the hospital during the gunman's rampage.

"I thought I was going to die," said Renaldo Del Villar, a 55-year-old patient who was in the third-floor emergency room getting treatment for a lower back injury, told the Associated Press.

He said an alarm went off, and police said there was an active shooter in the hospital. Someone on the loudspeaker also announced a "Code Silver."

5:49 p.m.  O'Neill said initial 911 calls reported a man firing a gun on the 16th floor. Patrol units responded and determined there had been multiple people shot on the 16th and 17th floors.

During the incident the hospital's fire alarm activated, apparently because the suspect attempted to set himself on fire, O'Neill said.

Officers found the gunman dead of an apparent self-inflicted gunshot wound on the 17th floor of the hospital, O'Neill said. He was wearing a white, medical-type coat.

They also found a female shot dead. De Blasio identified her as a doctor.

Six additional victims were found and transported to the trauma room, five with serious injuries and one with a gunshot wound to the leg, O'Neill said.

O'Neill did not identify the shooter but said he was a former employee of the hospital. CBS New York has identified the gunman as 45-year-old Dr. Henry Bello.

5:32 p.m. -- "We had a real tragedy here in the Bronx this afternoon," New York City Mayor Bill de Blasio said at a press conference Friday. De Blasio praised the first responders who "ran towards the danger" and the hospital staff who responded with "extraordinary bravery."

"Even in the midst of this horror, there were many, many acts of heroism," de Blasio said.

5:28 p.m. -- CBS News' Len Tepper reports the shooter was fired from his position at the hospital for harassing an employee. When he entered the hospital Friday he couldn't find that employee, and started shooting, according to Tepper.

The incident involves seven people, Tepper reported -- 6 victims and the shooter. The gunman along with one of the victims is dead.

5:05 p.m. -- The 120-year-old hospital has nearly 1,000 beds and one of the busiest emergency rooms in New York City, reports the Associated Press. It is about a mile and a half north of Yankee Stadium.

In 2011, two people were shot at Bronx Lebanon in what police said was a gang-related attack.

5:03 p.m. -- Garry Trimble told CBS New York's Andrea Grymes his fiancée works at the hospital and was ordered to stay inside when shots rang out around 3 p.m. He said she called him to tell him what was happening, and he rushed to the scene himself.

"I told her to just lay low, and stay quiet, and don't say nothing," Trimble said.

He said his fiancée was distraught.

"She was crying and she said, 'Somebody's going around shooting, and we locked up. We barricaded ourselves in the room with employees,'" he said.

It was not immediately clear why he was no longer working at the hospital, according to the Associated Press.

4:49 p.m. -- Robert Maldonado, an EMT, was at the hospital to transport a patient when the incident occurred, reports CBS New York. Maldonado told the station he and his partner saw a victim suffering from a gunshot wound on the 9th floor of the building. They applied pressure to the wound.

Because the elevators weren't working, Maldonado said he, his partner and police carried the victim down nine flights of stairs to the trauma room on the first floor.

4:32 p.m. -- Witness Gonzalo Carazo, who works at the the hospital, told CBS New York he smelled smoke and was told the hospital was on lockdown. He said a saw a doctor with a gunshot wound to the hand.

"I didn't hear any gunshots, all I hear was the doctor saying 'Help, help," Carazo said.

Carazo said he barricaded himself in a room for about 15 minutes before law enforcement arrived to escort him and others down the stairs and out the building.

"It was hot, and I was nervous," Carazo said. "I saw blood on the stairs."

4:31 p.m. -- The Associated Press reports that police say the shooter pulled a gun from beneath his white lab coat, killing at least one person and wounding others before apparently taking his own life.

4:18 p.m. -- The NYPD has identified the shooter as
Dr. Henry Bello, a former employee at Bronx Lebanon Hospital, reports CBS New York's Reena Roy. Four to six people were shot, and others suffered minor injuries trying to leave the building, the station reports.

4:12 p.m. -- A patient on the tenth floor of the hospital told CBS New York outside the building a "code red" alarm went off and he barricaded himself inside his room. He was later evacuated along with other patients. He said he did not hear gunshots.

4:01 p.m. -- J. Peter Donald, an NYPD spokesman, confirmed via Twitter the shooter is "deceased at the hospital."

3:55 p.m. -- CBS New York reporter Reena Roy tweeted that the NYPD has confirmed that the shooter is down and no longer a threat.

3:53 p.m. -- CBS New York reporter Reena Roy tweeted that the shooter is believed to have been wearing a white lab coat.

3:47 p.m. -- Deputy White House press secretary Sarah Huckabee Sanders said President Trump was aware of the incident. Federal agents from the Bureau of Alcohol, Tobacco and Firearms are responding to the scene, the bureau tweeted.

The incident began just before 3 p.m. at 173rd Street and Grand Concourse in the Mt. Eden section of the Bronx.

CBS New York reports that police have confirmed two people shot on the 16th floor of the hospital.

CBS New York reporter Reena Roy tweeted that police are going floor to floor in the hospital looking for the shooter who is believed to have a rifle and has reportedly barricaded himself. Police believe the shooter is a former employee of the hospital, Roy reports.