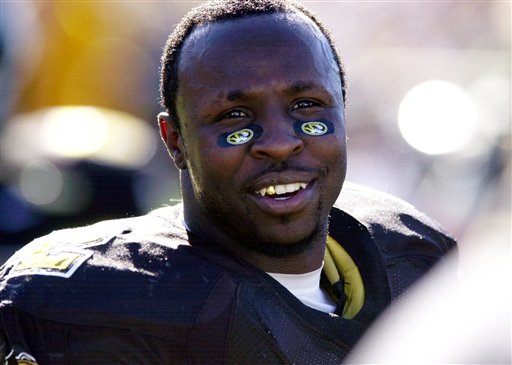 Broncos running back Damien Nash collapsed and died after a charity basketball game in suburban St. Louis on Saturday, less than two months after the slaying of teammate Darrent Williams.

"We have been informed of the passing of Damien Nash," team spokesman Jim Saccomano said Saturday night. "We are attempting to get more details. ... We do know it's true."

Former Missouri receiver Sean Coffey was at the event with Nash at Riverview Gardens High School and told the St. Louis Post-Dispatch there was no indication anything was wrong.

"Everything was normal. ... We were playing around at the game. ... He was fine," Coffey told the newspaper. "I give my best to his family. This is crazy. I can't believe this is happening. It was the first time I had seen him in a couple of years. I can't believe he's gone. I'm so happy I got to see him one last time."

Nash was from East St. Louis, Ill., and played two years at Missouri after playing at Coffeyville Community College in Kansas.

Lee Baker, who was teammates with Nash at Coffeyville, was supposed to have dinner with Nash after the basketball game. One of Baker's friends received a call that Nash had collapsed a short time after leaving the event.

"We still don't know what happened. He looked in great shape. He had four 3-pointers. He had a big smile on his face. There was no indication," Baker told The Associated Press. "He was a great guy. It's hard to believe. I want to think I'm dreaming. I was looking at him today, and thinking how proud I was of him. I was so happy for him."

One of Baker's final memories of Nash was of him holding his infant daughter after the game.

"I feel fortunate to have met him," Baker said. "At the game, you saw the looks on people's faces and how much they appreciated him."

A fifth-round draft choice by Tennessee in 2005, Nash played in three games for the Titans. The Broncos signed him as a free agent last season and he played in three games, rushing for 66 yards on 18 carries. In his two-year career, he had 24 carries for 98 yards and seven receptions for 55 yards.

"The Denver Broncos organization is once again struck with profound sadness over the tragic loss of one of our players," team owner Pat Bowlen said in a statement. "This is a tremendous tragedy and our hearts go out to the entire Nash family."

The Broncos are still reeling from the slaying of Williams, who was shot once in the neck while leaving a New Year's Eve party in his rented stretch Hummer in downtown Denver hours after the season ended. His slaying remains unsolved.

"The Broncos family has suffered a great loss with the passing of Damien Nash," coach Mike Shanahan said from Indianapolis, where he was attending the NFL's scouting combine along with general manager Ted Sundquist. "I am stunned and deeply saddened by this tragedy, and send my deepest condolences to Damien's family."