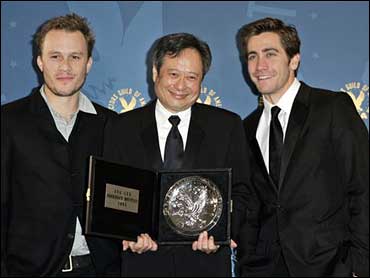 The most lauded movie of 2005 added another honor to its list Saturday.

Ang Lee was named filmmaker of the year by his peers, winning the Directors Guild of America award for the epic romance "Brokeback Mountain."

The win affirms Lee's position as favorite for best director at the Academy Awards on March 5. He has captured more than 10 honors for his work on the film, which follows a 20-year forbidden love affair between two Wyoming ranch hands. Oscar nominations will be announced Tuesday.

The Directors Guild award is one of Hollywood's best barometers for the Academy Awards. Only six times in the 57-year history of the Guild honors has the winner failed to go on to win the directing Oscar.

Lee was one of them. He won the guild prize in 2001 for "Crouching Tiger, Hidden Dragon," but Stephen Soderbergh took home the best director Oscar for "Traffic."

"There's no winner," Lee said before earning the night's top prize. "I think we're all winners because we're blessed. We're filmmakers. What a life."

Based on a short story by E. Annie Proulx, "Brokeback" stars Heath Ledger and Jake Gyllenhaal as roughneck sheepherding pals who conceal their homosexual relationship from their families. Ledger and Gyllenhaal have garnered acting nods for their performances from critics groups and the Screen Actors Guild, which will present its awards Sunday.

"Ang Lee is fierce in his timidity, his humbleness and his respect for everyone around him," Gyllenhaal said as he presented the diminutive director with a medallion in honor of his nomination. "He's frustrating and so damn wise."

Ledger was equally generous with praise, thanking Lee for "introducing us to these delicate characters."

"It took a delicate man to tell this story, and that's you," Ledger said.

"I don't know about you," Lee said with a laugh, "but that feels a little gay to me."

The guild prize is particularly meaningful because it's decided by fellow directors, Lee said.

"This is like winning at home," he said. "This is professional approval."

Lee was also nominated for a DGA prize in 1995 for "Sense and Sensibility."

Spielberg, who has earned 10 guild nominations, characterized the year's nominated feature films as "the most courageous" of any he's competed against.