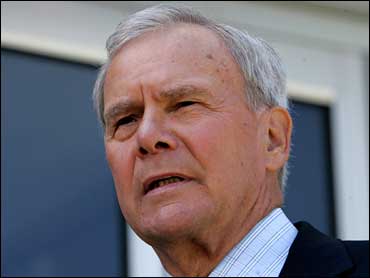 Veteran news anchor Tom Brokaw has agreed to moderate NBC's "Meet the Press" through the November election to fill the vacancy created by the death of Tim Russert.

Brokaw will start next week, the network announced Sunday. Anchor Brian Williams did the show this week and announced the decision at its end.

Brokaw first talked to NBC News President Steve Capus about what the network would do when the two men rode a train back to New York from Washington following Russert's funeral and memorial service on Wednesday. Brokaw told him Saturday that he would do it, Capus said.

"I'm just thrilled that Tom has agreed to do this," Capus told The Associated Press.

The decision gives NBC a well-known, authoritative presence at the helm of the broadcast in an election year. "Meet the Press" dominated the Sunday morning ratings under Russert, reportedly earning $60 million in revenue, and Brokaw's presence could blunt any effort by ABC's second-place "This Week" with George Stephanopoulos to cut into the edge.

Brokaw was the nation's most popular news anchor when he stepped down from "Nightly News" following the 2004 election. He has continued to make documentaries for NBC News and was a frequent commentator on MSNBC during primary night coverage this year.

He said he volunteered for the job in part as a tribute to Russert, who died of a heart attack on June 13. The two men were close friends who spoke almost daily and Brokaw gave the opening speech at Russert's Kennedy Center memorial.

"Tim was the first to say that `Meet the Press' was a national treasure and he was a temporary custodian," Brokaw said by phone from Montana. "We both understood the importance of it to the country and to NBC News and he took it to an entirely new level."

He intends to follow Russert's template of aggressive questioning based on research of a guest's public record. The show will continue to be Washington-based, with Betsy Fischer as executive producer.

"Many people have described this election as the election of a lifetime and we're in the thick of it," Capus said. "It just logically makes sense to have someone that the nation knows and the nation trusts with a steady hand."

It also gives NBC News time to study its options before deciding on a successor. Brokaw joked during Russert's memorial service that the Kennedy Center was filled with people interested in the job. David Gregory, Andrea Mitchell and Chris Matthews are considered the top in-house candidates.

Brokaw, 68, wouldn't be the oldest Sunday morning anchor if he decided to stick with it: CBS News' "Face the Nation" host Bob Schieffer is 71.

However, Brokaw has made it clear the move is temporary, Capus said.

"The plan is for me to be in place until they can find somebody who can take it over on a permanent basis," Brokaw said.

Brokaw had already planned to be a "utility player" in NBC News' convention and election coverage, and is the most likely choice to take the analyst's role beside Williams that Russert once filled. He's already emerged as a voice of caution during opinionated MSNBC coverage with Matthews and Keith Olbermann.

NBC News must also find someone for Russert's job as Washington bureau chief.

Williams' announcement Sunday followed a package of highlights from Wednesday's memorial service. Brokaw last week anchored a "Meet the Press" that was entirely a Russert tribute.

Some critics have accused NBC News of being excessive in its Russert memorializing, but Capus said he's received condolence letters from world leaders and that it was clear Russert had touched people more than typical journalists do. He noted that other networks covered Russert's death extensively and that CBS News placed a full-page condolence ad in The New York Times last week.

"I offer no apologies," he said.