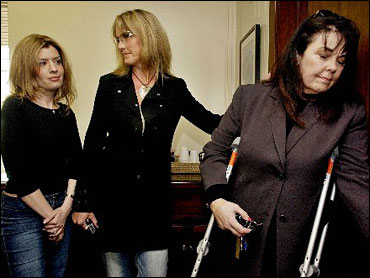 The complaints filed Monday are a first step paving the way for a lawsuit against the city of Beverly Hills, the Beverly Hills Unified School District, and at least three oil companies.

Brockovich filed 25 claims on behalf of cancer patients who were either students or teachers at the school. But she expects the number of claims to rise and eventually grow to around 300.

The plaintiffs were at Beverly Hills High School from the 1970s through the 1990s. All either have or have been treated for Hodgkin's disease, non-Hodgkin's lymphoma, or thyroid cancer.

Masry contends that the school's cancer rate is 20 to 30 times above the national average.

"I hope that they go in there and clean up that school and make it safe," said Moss, 28. "What I've been through has obviously been the worst thing that anybody can go through. I've basically been robbed of my 20s."

Court papers allege that tests conducted by an environmental specialist over a five-month period found high levels of toxic fumes in and around the school's athletic fields, including benzene and n-hexane, byproducts of the oil industry. The complaints filed Monday also say that an active oil rig that sits on the edge of the 21-hundred-student campus is suspected of exuding toxic fumes.

The South Coast Air Quality Management District, which tracks air pollution for most of Southern California, disputes the Brockovich findings.

The agency says it found no evidence of unusually high levels of toxic pollutants in several air samples it collected.

The campus oil rig is no secret in Beverly Hills, which early in the 20th century was rich with oil. Shielded by panels covered in brightly painted flowers, it produces about 450 barrels of oil and 400,000 cubic feet of natural gas a day.

Mike Edwards, vice president of Venoco Oil - owner of the rig - said environmental tests have been done at the site.

"They've been out there for the past two and one half months doing air quality testing. They've done 40 hours of testing and their results show air quality is normal at the high school," says Edwards.

"We want some answers, and we're going to continue to move forward until we get them," said Brockovich, in an interview with KCBS-TV in Los Angeles. "I think it's really kind of sad. I mean, school districts are here to protect and preserve and do right by the children, and something went terribly wrong here."

Authorities must be held accountable, said Brockovich, arguing that the students and teachers were "lied to, they want some justice, they want some answers, they want to find out the truth, and unfortunately that doesn't always happen until you initiate litigation, which is forthcoming. That's why we're here today."

Accountability is a specialty for Brockovich, whose years of persistence won a $333 million settlement from Pacific Gas and Electric Co. for more than 600 residents of Hinkley, Calif. The residents had accused the utility of allowing high concentrations of toxic chromium 6 to pollute their groundwater.