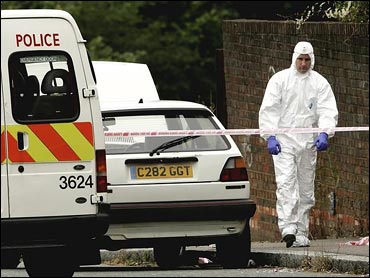 British police investigating a series of failed bomb attacks in London said they arrested four men Wednesday in the city of Birmingham, and explosives experts were examining a suspect package found during the searches.

Police said they could not confirm reports that one of the four was a suspected attacker from July 21, when four bombs planted on London Underground trains and a bus failed to fully detonate.

A spokesman for the metropolitan police said one man was arrested during a search of a home in England's second largest city of Birmingham at 4:30 a.m. The man was shot with a stun gun during the search and police said they uncovered a package that was being examined by explosives experts.

Three other men were arrested shortly afterward at another home in the city, about 120 miles northwest of London.

"The operations are in connection with the incidents in London on July 21," the spokesman said on condition of anonymity.

The spokesman said the first man arrested was brought to the high-security Paddington Green police station in central London; the other three were being held in custody in Birmingham.

Police launched a manhunt after the July 21 attempted bombings and released images of four men thought responsible for planting the devices. They also released the names of two of the suspects.

Police have been trying to determine whether last week's failed bombings were connected to the deadly July 7 attacks that killed 52 people and the four suicide bombers who carried them out.

In a separate development, two other men were arrested on suspicion of terrorism while traveling on a train in England's midlands region.

Lincolnshire police said the train, which was on its way to London's King's Cross station from Newcastle, was stopped at Grantham where the men were arrested at 11 p.m. Tuesday.

The men were being held under the Prevention of Terrorism Act and it was not immediately clear if the arrests were linked to the investigation into the London bombings.

The Birmingham arrests bring the number of people that police have said are being held in connection with the July 21 attempt to nine. Police last week arrested five other people.

The bombs were stored in clear plastic food containers and put into dark-colored bags or backpacks. Clarke said those four bombs were similar to another found abandoned in a park Saturday, raising fears that a fifth bomber is on the loose.

Tuesday, Prime Minister Tony Blair said his government was determined to press forward with new anti-terrorism legislation in the wake of the attacks and vowed not to "give one inch" on his policies in Iraq or the Middle East.

Polls suggest a majority of Britons share that view and that among Muslims, according to a poll released Tuesday, 79 percent believe Iraq was a factor in the attacks.

Two of the suspects that have been named for allegedly taking part in the July 21 attempt have been identified as Yasin Hassan Omar, 24, and Muktar Said Ibrahim, 27, also known as Muktar Mohammed Said.

Omar arrived in Britain from Somalia in 1992 at age 11, the Home Office said. The 24-year-old, a Somali citizen with British residency, is suspected of attempting to blow up a subway train near Warren Street station.

Said came to Britain in 1990 from Eritrea, his family said. He was granted residency in 1992 and British citizenship in September 2004, the Home Office said.

Both are the children of refugees, the government said.

Somalis have been the largest group of asylum seekers over the last decade in the U.K., with Eritreans in the middle of the pack.

Said attended his local north London high school in the Stanmore neighborhood between 1991 and 1994, when his family said he moved away from home, returning only rarely to visit.

"We were shocked when we saw Muktar's picture in the national news," the family said in a statement. "We immediately attended the police station and made statements to the police. We would suggest that anyone with information contacts the police."

Neighbor Sarah Scott remembered a discussion with Said last November about religion, and his reaction when she told him she was an atheist.

"He said I should (believe in God) and that he was going to get me some information," the 23-year-old said. He returned with a booklet called "Understanding Islam," in which he had highlighted key passages.

"Anyone who says 'there is no God except Allah' and dies holding to that will enter paradise," she recalled one passage as reading.

On Tuesday, police explosives experts took a close look at what they called suspicious "material" found in a search of an apartment that began on Monday. Said had recently visited the apartment, according to Peter Clarke, head of the Metropolitan Police anti-terrorist squad.

Authorities believe the bomb factory involved in the July 21st attempted bombings was in a public housing project in North London, and as CBS News Correspondent Richard Roth reports, there's a new worry: that the bombers may have come back for more explosives after their attacks last Thursday failed.

Roth reports security camera photos jogged the memory of a neighbor who thinks she saw one of the bombers outside his ninth floor apartment the next day, with two companions.

"As soon as they seen me, they was suspicious and looked very worried," the neighbor said. "They panicked (and) jumped back into the flat and shut the door."