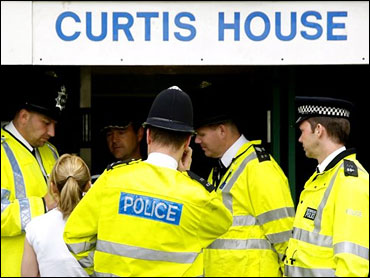 After arresting five people on suspicion of assisting in last week's failed attacks on the London transit system, the city's police chief said his force was still "racing against time" to find the men who carried the faulty bombs to their targets.

Prime Minister Tony Blair said Tuesday that Londoners were "being tested" by the latest attempted attacks and the July 7 bombings that killed 56 people, but were "standing firm."

On Monday, police released the names of two of the four suspected July 21 bombers along with details on how the four fled three subway trains and a bus when their devices failed to fully detonate.

Peter Clarke, head of the Metropolitan Police anti-terrorist squad, said those four bombs were similar to another found abandoned in a park on Saturday, raising fears a fifth bomber was on the loose.

Police say the bombs were put into gallon-and-a-half size Tupperware-style plastic containers. They've issued a plea to storekeepers, asking if anyone remembers selling tubs like that, or if security-camera pictures of the suspects jog anyone's memory, CBS News Correspondent Richard Roth reports.

The five men being held are not believed to include any of the four suspected bombers filmed on surveillance cameras.

Clarke identified two of the suspects as Yasin Hassan Omar, 24, and Muktar Said Ibrahim, 27, also known as Muktar Mohammed Said, but did not give their nationalities.

Clarke also released new closed-circuit images of the four suspects and gave details of their movements, saying one bolted from a subway station pursued by passengers, while another jumped through a subway window and fled down the tracks.

Armed officers on Monday raided a London apartment that Said — suspected of trying to bomb a bus in east London on Thursday — was believed to have visited recently. Forensic officers in white overalls searched the apartment in Curtis House, a concrete high-rise in the city's northern suburbs.

Metropolitan Police also said Monday they had arrested two people on suspicion of terrorism in the area but not at the raided address. Three other suspects are already being questioned at a high-security London police station "on suspicion of the commission, instigation or preparation of acts of terrorism" in connection with the July 21 attacks.

On Sunday, police destroyed a package found in bushes in a west London park not far from the scene of the attempted bombing at Shepherd's Bush Underground railway station. Clarke said forensic examination had shown "clear similarities" between the device and the bombs found on three subway trains and a bus last Thursday.

"All five of these bombs had been put into dark-colored bags or rucksacks. All five were made using the same type of plastic food storage container," Clarke said.

They are not indicative of any particular terrorist organization's techniques, said Brian Jackson, a specialist in terrorist technology at Washington's Rand Corp., a think-tank that conducts national security research.

"There's certainly a lot of flexibility in the way people can make bombs, so most likely this was just something that was a convenient size for the type of bomb," he said.

At his monthly news conference, Prime Minister Blair insisted that the international community should not "give an inch" to terrorists.

Asked whether the British-backed and U.S.-led invasion of Iraq had fueled terrorist attacks around the world and in London, Blair said "there was no excuse or justification" for their actions of the bombers.

The leaders said they were united in their determination to fight terrorism, but warned that giving police the power to hold terror suspects for three months without charge could erode civil liberties.

As the investigation rolled on, police faced growing criticism over the killing of an unarmed Brazilian, mistaken for a potential bomber.

The family of Jean Charles de Menezes, 27, shot dead Friday inside a subway carriage in front of horrified passengers, said they were considering legal action against the police.

Roth reports police now say de Menezes was shot at least eight times: seven times in the head and once in the shoulder. British officials have been expressing regret about the shooting of an innocent man, but they're still defending the police "shoot to kill" policy as necessary to disable suicide bombers.

Police Commissioner Ian Blair said police were mounting "an absolutely brilliant operation, and it is, of course, racing against time."

Blair has indicated he believed al Qaeda-linked terrorists were involved in both the July 7 and July 21 attacks. Asked if the attacks were connected, he said: "We have no proof that they are linked, but clearly there is a pattern here."

Police were investigating whether some of the July 21 suspects might have visited the same Welsh whitewater rafting center as two of the July 7 suicide bombers, Mohammed Sidique Khan and Shahzad Tanweer.

The men went rafting there June 4, according to the National Whitewater Center. Police have refused to comment on media reports that a rafting center brochure was found in the explosives-laden knapsack found on a bus July 21.

Center director Paul O'Sullivan told The Associated Press the two identified July 21 suspects were not registered on the same rafting trip as the July 7 suspects.