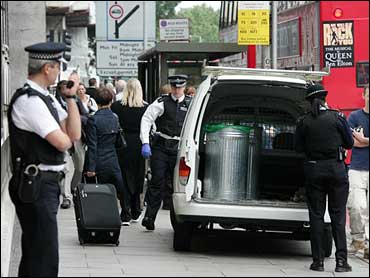 Police said three people were arrested Sunday at Heathrow Airport under Britain's anti-terrorism act, but they declined to link the suspects to last week's bombings in London.

Andy Trotter, deputy chief constable of British Transport Police, said at a news conference that it would be "inappropriate and pure speculation" to connect the arrests to Thursday's subway and bus bombings.

The report came as London police announced that a number of bodies had been removed from the subway train where remains were still trapped, but conditions underground were still "very hot, very dusty, very dangerous."

Deputy Assistant Commissioner Brian Paddick of Metropolitan Police also said at a briefing that 1,700 calls have come into a special anti-terrorism hotline seeking information on the bombings. He said some of the calls have proven "very, very valuable to us."

He issued a special appeal for videos, photos and cell phone images that might provide clues to the terrorists' identities.

Paddick said the death toll from the four bombings stood at 49.

Clarke, the Cabinet minister responsible for law and order, told BBC TV that terror has always been a threat.

"The fact is the terrorist threat is a real one as we saw so dramatically and awfully on Thursday," he said.

"Our fear is of course of more attacks, until we succeed in tracking down the gang which committed the atrocities on Thursday and that's why the number one priority ... has to be the catching of the perpetrators," he added.

The city's shock — with many questions still unanswered — was evident Sunday as people gathered for memorial services across the capital to remember the more than 49 people killed and 700 injured.

Hundreds of fliers, photos and calls for help appeared pleading for information about loved ones not heard from for days and scores of flower bouquets were placed outside Kings Cross subway station.

With the whole country on heightened alert, police on Saturday night evacuated 20,000 people from the entertainment district in central Birmingham after intelligence suggested a security threat.

Crowds in the city center faced "a real and very credible threat," police Chief Constable Paul Scott said Sunday. He declined to describe the nature of the threat but said the danger had passed.

Police carried out one controlled explosion on a suspect bag on a bus, but concluded that it was not a threat. Scott said the suspect package was not related to the larger security threat.

Birmingham, 110 miles northwest of London, was the target of one of the worst Irish Republican Army bombings of the 1970s. Twenty-one people died when the IRA bombed two pubs on Nov. 21, 1974.

Investigators, who on Saturday revised the timings of the subway blasts to near simultaneous instead of almost half an hour apart, are looking at claims by two al Qaeda-inspired groups that they carried out the bombings.

Former Metropolitan Police chief John Stevens said he believed the bombers were "almost certainly" British and that there were around 200 more people born and bred here willing to attack.

"They are also willing to kill without mercy — and to take a long time in their planning," Stevens, who served as commissioner for five years before retiring earlier this year, wrote in an article in the News of the World newspaper Sunday. He added that the police had thwarted eight attacks in the past five years.

Clarke said that investigators, who are also working with foreign intelligence agencies, are keeping an open mind about the origins of the attackers, but acknowledged that there are British citizens whom the government suspects of terrorist activity.

British media said investigators had asked their European counterparts, including Europol, to search for Mohamed al-Guerbouzi, a 44-year-old Moroccan who was given asylum in Britain.

Europol spokesman Rainer Wenning declined to comment on the reports.

However, al-Jazeera, the Arabic news organization, reported on its Web site that it had interviewed al-Guerbouzi, quoting him as saying British authorities knew his address in London.

Al-Guerbouzi was convicted in absentia by Morocco in December 2003 in connection with the Casablanca terrorist attacks and sentenced to 20 years in prison. Britain never extradited him.

Mustafa Setmarian Nasar — a Syrian suspected of being al Qaeda's operations chief in Europe and the alleged mastermind of last year's Madrid railway bombings — has emerged as a suspect in the London attacks, according to unidentified investigators cited in The Sunday Times, The Sunday Telegraph and The Mail on Sunday.

London's Metropolitan Police said they would not comment on the names of any suspects.

The confirmed death toll from Thursday's attacks was 49, but police said it inevitably would rise above 50 after teams of police, forensic scientists and investigators remove bodies still in London's vast Underground transport system.

It was not known how many bodies remained inside the Russell Square subway tunnel, but difficult conditions — including temperatures of up to 60 degrees Celsius (140 Fahrenheit), asbestos and rats — made recovery impossible.

"It is a very harrowing task," detective Jim Dickie said. "Most of the victims have suffered intensive trauma, and by that I mean there are body parts as well as torsos."

Forensic experts were relying on fingerprints, dental records and DNA analysis to identify the victims of the blasts. None of the 49 dead have been formally identified.

Elsewhere in London, the search for survivors by their families and friends intensified.

As sobbing relatives held pictures of people missing at subway stations around the city, crews looked into reports of more than 1,000 missing.

More than 20 people were still in critical condition in London hospitals.