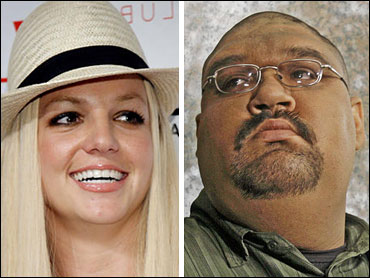 The public learned a little more about the nasty allegations of drug use and self-importance being levied against once-golden teen star Britney Spears.

Her body guard for two months following her stint in rehab appeared on "Larry King Live" with his attorney, Gloria Allred. Barretto said he isn't speaking out because he wants to get back at his former boss, but because he fears for the safety of her two young sons, Sean Preston 2, and Jayden James, 1. He said Spears fired him because he didn't hear her tell him to pick up her hat, even though she knew he is hard of hearing.

Barretto was a witness for Spear's ex-husband Kevin Federline in the custody hearing over their sons. As a result of his testimony, Allred said the judge directed Spears to undergo random drug testing twice a week after finding she is involved in "habitual, frequent and continuous use of controlled substances and alcohol."

Barretto said he came to the conclusion that Spears had a substance abuse problem after finding her in several precarious situations. For example, he said, three, four or five weeks into his job protecting the singer, she was supposed to do a concert in Anaheim, Calif., but was nowhere to be found. He said he found her in a hotel room littered with food, clothes, alcohol, a white powdery substance and a pipe. There was a male in the room who appeared to be asleep.

"We knew we had to get her out of there as soon as possible," he said. "She appeared to be under the influence, she was kind of incoherent, she was looking for her cell phone ... she was biting her nails, her pupils were dilated, didn't conversate well, sweating, acting nervously."

Barretto said he eventually convinced Spears to come with him. She walked out on her own power but said she felt sick. They got in a car but while they were driving down Sunset Blvd., Spears demanded that they stop in traffic and get on her tour bus.

"You do what she does, basically, what she wants to do," he said.

Barretto said he saw Spears use drugs twice, both times at a Hollywood night club. On one occasion, she was sitting at a table toward the back corner and asked Barretto to hold a curtain to cover her private area.

"I did so for a length of time, it was getting kind of difficult after a while holding up that big heavy curtain," he said, "and I turned to her over my shoulder to see if it would be OK to let go of the curtain and that's when I noticed that she was doing this."

Spears is still planning to release a new album featuring her single "Gimme More" in November.