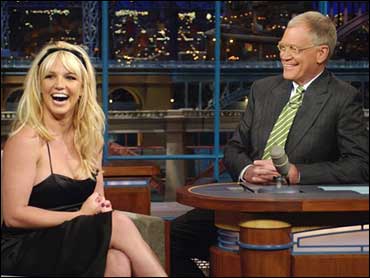 "It just kind of happened," the 24-year-old singer reveals in an interview in the latest issue of People magazine, on newsstands Friday.

She adds, laughing: "I'm going to wait a while for the next (one)!"

Having back-to-back babies can be stressful, she says, but she adheres to her mom's advice to take it "one day at a time."

"It is now starting to get a little tiring, holding (Sean Preston), but the whole pregnancy I've done it a lot because he's very attached," she tells the magazine. "It makes me feel needed and wanted, so I like it too."

Spears says she and Federline, 28, don't know the gender of their baby-to-be. The little one and its big brother "are going to be so close together, it's going to be weird. But I love it," she says.

Spears — who has gained about 40 pounds during her pregnancy — plans to hit the gym and begin dieting soon after having the baby, scheduled to be a Caesarean birth, as was her first. She is not, though, ignoring her cravings at this point.

"Crunching ice and chocolate, oh my God," she says. "I'll get up in the middle of the night and I'll get a Hershey's bar, the real big ones, and I'll put it in the microwave and melt it and eat it. It sounds disgusting, but it's so satisfying."