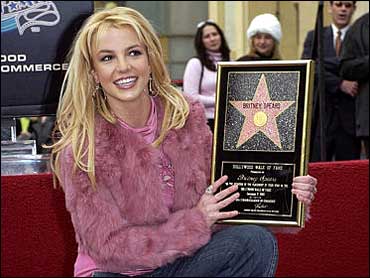 Part of Hollywood Boulevard is now "In the Zone" of Britney Spears. The pop star received a star on the Hollywood Walk of Fame Monday before nearly 2,000 screaming fans.

Spears was honored with the 2,242nd star on the walk.

The event took place one day after her corset-jiggling appearance on the American Music Awards and a day before her latest album, "In the Zone," was set to arrive in stores.

She arrived at the ceremony in jeans, a pink shirt and a furry pink jacket, and immediately began signing posters and magazines for admirers. One young woman, perched on a friend's shoulders, leaned over a barricade and begged Spears to touch her hand — then exploded in tears when the singer complied.

"I'm seriously speechless right now," Spears told the crowd. "This is something that I've dreamt about since I was a little girl. I can't believe I'm actually here with all of you amazing fans. Hello?"

At 21, Spears tied with former "Little House on the Prairie" actress Melissa Gilbert for being the youngest person to accept a Walk of Fame star. Gilbert, now 39 and president of the Screen Actors Guild, received her honor in 1985.

Spears made funny faces at friends and giggled as Johnny Grant, the Walk of Fame master of ceremonies and chairman of the Hollywood Chamber of Commerce, introduced her by reading the names of her singles and albums.

The performer has gone from posing as a schoolgirl to sing "... Baby, One More Time" and saying sex should be saved for marriage to recording "I'm a Slave 4 U," kissing Madonna during the MTV Video Music Awards and posing nearly nude for magazine covers.

Her latest album, aimed at crafting an edgier image, includes moaning and heavy breathing on tracks such as "Breathe on Me" and "Touch of My Hand."

Ralphie May's cause of death revealed
Thanks for reading CBS NEWS.
Create your free account or log in
for more features.
View CBS News In
CBS News App Open
Chrome Safari Continue
Be the first to know
Get browser notifications for breaking news, live events, and exclusive reporting.