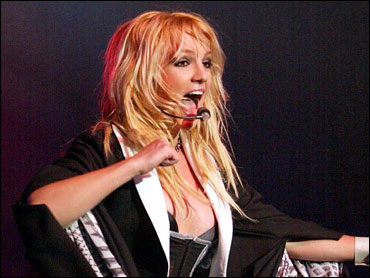 Britney Spears has decided to try marriage one more time.

The pop singer said "I do" to boyfriend Kevin Federline in a private ceremony Saturday night, with only about 20 to 30 guests on hand.

"She did marry him," said Jive Records spokeswoman Sonia Muckle, declining to provide any details about the wedding, held at a private home in Studio City, Los Angeles, according to "Entertainment Tonight."

While the two successfully kept the media in the dark about the date and time of the ceremony until the wedding was over - Spears' relationship with Federline was hardly a secret.

Spears, 22, and Federline, 26, began dating this past April and announced their engagement in late June.

Federline appeared in the movie "You Got Served" and was a backup dancer for singer Justin Timberlake, Spears' former boyfriend.

Federline was previously involved with actress Shar Jackson of TV's "Moesha." They have two children - a 2-year-old and a newborn.

His latest show biz credit is with Spears - as a featured performer on the video for "My Prerogative" - a cover of the 1980s Bobby Brown hit - which is to debut this month.

The song is part of Spears' upcoming CD of the same name, coming out in November, which is said to include her greatest hits.

"Greatest hits" may seem premature at age 22, but Spears has been in show business nearly all her life - on stage since she was a small child, landing her first Disney audition and first New York agent at age 8. She spent three summers at the Professional Performing Arts School Center, was a child actor off-Broadway and on the Mickey Mouse Club, shopped around her demo tape as a singer, worked the teen concert circuit under contract to a record company, and teamed up with "N Sync before topping the charts on her own in 1999 with "...Baby One More Time."

The marriage to Federline is the second marriage in nine months for Spears.

In January, she married childhood friend Jason Alexander in a spur-of-the-moment trip to a wedding chapel in Las Vegas. That marriage was annulled 55 hours later.

Spear's label said Spears and Alexander had taken a joke too far. The bride wore a baseball cap and torn jeans down the aisle and was escorted by a casino limousine driver.

News of Spear's latest nuptials made a splash at the Emmy awards Sunday night, where some celebs wondered about the couple's chances and others offered good wishes and advice.

"I was just getting used to the other guy," quipped Dennis Haysbert, who plays President Palmer on "24."

Matthew Fox, star of "Lost," wondered if Spears might not be rushing things a bit.

"Slow it down a little, young lady," said Fox, 38, whose breakthrough role on "Party of Five" a decade ago was as a teen who is suddenly thrust into a father's role when his parents are killed in a car crash.

Dennis Franz, 60, also had some advice - on how to make the marriage last.

Actress Bonnie Hunt was skeptical about the long-term prospects of the marriage: "This too shall pass," she cracked.

But comedian Ellen DeGeneres said to give Spears a break. "Everybody is looking for happiness and love," she said.