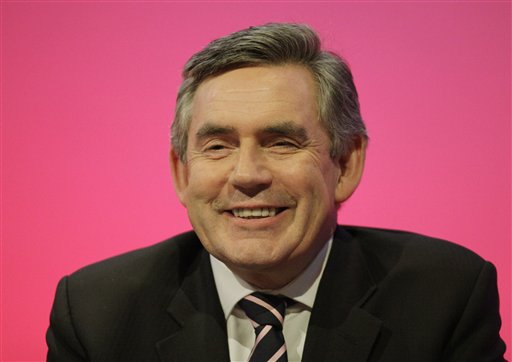 Brown traveled to Belfast in hopes of persuading leaders of the British Protestant majority to stop blocking his plans to transfer responsibility for Northern Ireland's justice system to local hands. He planned daylong talks at Stormont, the government center in east Belfast.

Control over the police and courts was the only key power retained by London two years ago when former foes forged an unlikely Belfast coalition, setting aside four decades of hostility and a conflict that left 3,700 dead.

But, today, tensions _ and the risk of a government collapse as a wider United Kingdom election looms _ are on the rise again.

The Irish Catholic side insists that gaining local control of justice matters will be the only way to secure Catholic support for law and order. They argue that without this long-sought move, it will prove impossible to isolate Irish Republican Army dissidents, who still are trying to kill police officers more than a decade after most IRA members abided by a cease-fire agreement.

The stalemate over the proposed Justice Department in Belfast is fueling broader tensions, illustrated by recent public bickering between the two joint leaders of the government, First Minister Peter Robinson and Deputy First Minister Martin McGuinness, a former IRA commander.

Both accuse the other of reinforcing their tough-guy images with supporters in advance of the next U.K. parliamentary elections, which must happen by mid-2010 but could come sooner. Robinson's Democratic Unionists and McGuinness' Sinn Fein currently dominate ownership of Northern Ireland's 17 seats in Parliament in London and want to keep it that way.

Both are seeking a negotiating triumph with Brown. For Sinn Fein, simply ending London's oversight of the police and courts would be a vote-winner. For Robinson, it might be big money from Brown that seals the deal.

Robinson's Democratic Unionists contend that they already support the transfer of justice powers in principle _ but only if British taxpayers foot the bill for new layers of government bureaucracy. Democratic Unionist negotiators are demanding around 600 million pounds ($1 billion) in extra funding from London to launch the Justice Department.

Brown last visited Belfast in March after IRA dissidents killed two unarmed, off-duty British soldiers and a policeman _ the first killings of British security forces in Northern Ireland since 1998, the year of the peace accord that proposed power-sharing.

Splinter groups opposed to the IRA's 1997 cease-fire and 2005 disarmament are hoping that violence will prevent full Catholic cooperation with the police and, eventually, drive a deadly wedge between Sinn Fein and Protestant leaders.

Both Robinson and McGuinness emphasize that, however poor their relations, they won't permit this to happen.