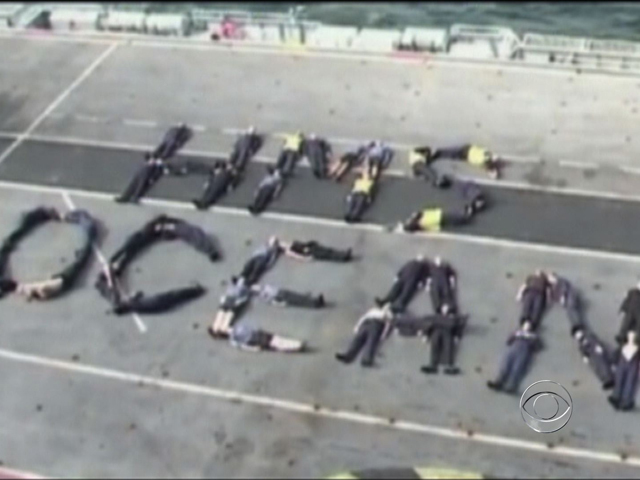 For active duty members of the military, prolonged deployments often mix danger with tedium. So when they finally get a chance to cut loose, they take it. CBS News Mark Phillips has a case in point that has the whole world watching:

At a homecoming with their families, the crew of the British helicopter carrier HMS Ocean may have expected to come home to a hero's welcome, or a warm family welcome -- but not to be welcomed as YouTube rock stars. However, that's what they've become.

The music video they made while on a tour of duty in the Mediterranean -- in which they mime the words to a Mariah Carey Christmas hit, "All I Want For Christmas Is You" -- has gone viral. Well over a million people have watched it and the hits just keep on coming.

The crew of the Ocean had a special reason for wanting to be home for Christmas. They had originally been deployed to the Mediterranean for a seven-week training exercise, but became a major launching pad for the NATO effort supporting the anti-Qaddafi forces in Libya. Seven weeks became seven months.

"We did it for the first instance," she said, "to create a bit of a morale boost for the guys on board, and then also as a virtual Christmas card to send to their friends and families back home. We had absolutely no idea it was going to go so international."

But as popular as it's turned out to be, there's only one audience the sailors really cared about.

"What did you think of seeing daddy on the computer?" asked a mother to her little daughter at the homecoming.