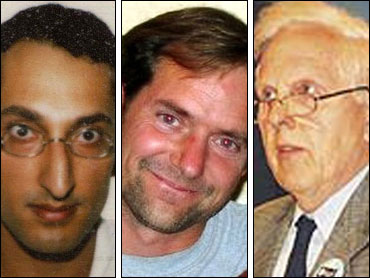 Clouding Kember's return is the issue of gratitude.

The head of the British Army, Gen. Sir Mike Jackson, said in a statement he was "saddened" there did not seem to be any gratitude for the efforts by U.S. and British soldiers to free Kember and his fellow peace activists, reports CBS News correspondent Larry Miller.

However, upon his arrival at London's Heathrow Airport, Kember said, "I do not believe that a lasting peace is achieved by armed force, but I pay tribute to their courage and thank those who played a part in my rescue."

Before leaving for his peacemaking work in Iraq, Kember said if he was taken hostage he did not want to be freed by the military.

Kember was greeted by his wife, Pat, who had joined the world in watching several videos broadcast on television showing her husband and other hostages from the Christian Peacemakers Teams group being held in captivity.

On Thursday, a joint U.S.-British military operation freed Kember, 74, and two Canadian peace activists, James Loney, 41, and Harmeet Singh Sooden, 32, from a house west of Baghdad where they were held. Upon being freed, the three learned that fellow hostage American Tom Fox, 54, had been killed by the hostage takers.

The two Canadian peace activists left Iraq on Saturday on a flight to the United Arab Emirates.

As Kember reunited with his family, some Britons voiced displeasure at an apparent lack of a formal thank you from the peace activists for the efforts to rescue them.

Britain's chief of defense staff said Friday on Channel 4 News: "I am slightly saddened that there doesn't seem to have been a note of gratitude for the soldiers who risked their lives to save those lives." Asked if he meant that Kember had not said thank you, Jackson said: "I hope he has and I have missed it."

Supporters of Kember said there had been a public thank you.

Jonathan Bartley, who works with Christian Peacemakers in Britain, said the team had "expressed great sadness" at suggestions the hostages had not thanked the soldiers who rescued them.

In a statement Thursday night, Christian Peacemaker Teams said: "We are grateful to the soldiers who risked their lives to free Jim, Norman and Harmeet. As peacemakers who hold firm to our commitment to nonviolence, we are also deeply grateful that they fired no shots to free our colleagues. We are thankful to all the people who gave of themselves sacrificially to free Jim, Norman, Harmeet and Tom over the last four months, and those supporters who prayed and wept for our brothers in captivity, for their loved ones and for us, their co-workers."

Kember was flown out of Baghdad on a British military plane on Friday, saying: "I'm very much looking forward to getting home to British soil and to being reunited with my family."

Before Kember returned to London on Saturday, his wife, Pat, said she was "overjoyed" at his release but sorry for Fox's family. The four peace activists were kidnapped Nov. 26, and Fox's body was found shot in the head and chest and dumped in western Baghdad on March 9.

Maj. Gen. Rick Lynch, a U.S. military spokesman in Baghdad, said the 8 a.m. rescue Thursday was launched three hours after a detainee told American forces where the hostages were. The man was captured by U.S. forces on Wednesday night.

Peggy Gish, a Christian Peacekeeping Team member in Baghdad, said Kember and the two Canadians did not appear to have been tortured or abused. Most of the time, the captives were not tied up, and the captors — a little-known Iraqi radical group — provided Kember with medication for high blood pressure and an aneurysm.

Gish said the captors tied up the hostages and then fled before the multinational forces arrived.

Despite the hostages' ordeal, the men were still committed to working for peace in Iraq, said Gish.

In Iraq, British, U.S. and Canadian authorities kept the three freed hostages in complete isolation and unable to say anything publicly before they left the country.