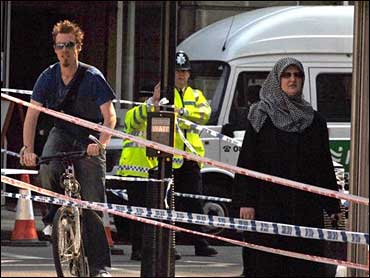 Criticism of the British government grew Monday over the revelation that the vaunted domestic intelligence service did not detain one of the London attackers last year after linking him to a suspect in an alleged plot by other Britons of Pakistani descent to explode a truck bomb in the capital.

The MI5 found itself under fire as new information emerged Monday about the bombers' connection with Pakistan: Two of the suspects traveled together to the southern city of Karachi last November and returned to London in February. A third bomber went to the same city last July.

The British intelligence service reportedly did not find Mohammad Sidique Khan — who was checked out in connection with the alleged bomb plot last year — to be a threat to national security and failed to put him under surveillance.

The Home Office, which speaks for MI5, declined to comment on the suggestion that agents had dropped a crucial lead, or on reports that a Briton of Pakistani origin suspected of links to al Qaeda had entered the country two to three weeks before the attack and flown out the day before.

If true, "this would indeed be evidence of an enormous failure," said Charles Shoebridge, a security analyst and former counterterrorism intelligence officer.

Despite the criticism, the government has not launched any investigations into why the security services did not pick up the London bombers before July 7, when the attackers blew up three London subways and a double-decker bus, killing 56 people.

"All the political parties are agreed that the right course at the moment is to focus on what further steps need to be taken in relation to the law but also getting to the root of that evil ideology that is driving this terrorism," Charles Falconer, the lord chancellor, told the BBC. "Now is not the time for any form of inquiry."

Critics acknowledged that intelligence officials face a tricky task in choosing how to allocate their resources for tasks like surveillance.

Nonetheless, "had the assessment of the available intelligence regarding Khan been different, so might also have been the outcome of July the 7th," Shoebridge said.

According to The Independent and other British newspapers, British intelligence reportedly found that Khan, 30, had visited the home of a man linked to an alleged plot to blow up a London target, possibly a Soho nightclub, with a fertilizer bomb.

In that investigation, detectives arrested eight suspects across southern England in March 2004 and seized a half ton of ammonium nitrate, a chemical fertilizer used in many bomb attacks.

The eight suspects were to go to trial this year. But given the July 7 attacks, the trial may be delayed, Scotland Yard told The Associated Press.

John Carnt, a former Scotland Yard detective superintendent with expertise in counterterrorism and covert surveillance, said intelligence agencies are so bombarded with information it can be hard to home in on an individual.

Khan's "might have been one name amidst many other names, and there may have been nothing else that added weight to it," said Carnt, now managing director of Vance International Ltd., a London-based security and intelligence company. "You've got bits of information coming across your desk. It can be difficult to identify which bit to pay closer attention to."

The purpose of their visits was unclear. All three were born in Britain to Pakistani parents, but their ancestral country is also home to al Qaeda and other extremist Muslim groups.

Pakistani intelligence officials have said Tanweer stayed briefly at a religious school and met with a member of an outlawed militant group. Pakistani intelligence agents have questioned students, teachers and administrators at the school in Lahore, and at least two other al Qaeda-linked radical Islamic centers.

On Tuesday, Prime Minister Tony Blair was set to meet with Muslim leaders, along with political officials, to try to forge a common, united front against Islamic extremism. Conservative party leader Michael Howard and Liberal Democrat leader Charles Kennedy were to attend.

The Sunday Times, quoting unidentified American officials, said U.S. intelligence had warned Britain that the fourth July 7 bomber, Jamaican-born Germaine Lindsay, 19, was on a terror watch list but MI5 failed to monitor him.

However, a U.S. law enforcement official told the AP on Monday he was unaware that Lindsay was on any U.S. lists of known or suspected terrorists. American authorities are reviewing intelligence and interviewing people already in custody to determine any connection to the bombers, said the official, who spoke on condition of anonymity because the investigation is continuing.

The best leads in the case so far had come from a combination of old-fashioned detective work and modern technology, with little apparent out-front assistance from the intelligence services, Shoebridge said.

Detectives identified the four suspected bombers within days of the attacks by scouring the bomb sites for physical clues and scrutinizing closed-circuit television footage. Crucial help came from Hussain's distraught mother, who phoned police to report her son missing.

Investigators hope to track down leads that will help them crack the network that aided — and perhaps recruited — the four bombers.

They expect more forensic evidence to come from the bombing sites and the homes they have raided in Leeds, northern England, home base of three of the suspects. Authorities are also questioning a man they have arrested.

"This investigation is in some respects going in reverse," Carnt said. "They actually know who did it, and now they're tracing back to learn who their associates were, who they met with, where they socialized."

Detectives reportedly found nine bombs in a car left at a train station parking lot in Luton, the hometown of Lindsay. They have also reportedly uncovered extremist literature in the Leeds homes and another residence in Aylesbury, northwest of London, and are examining computers seized from those houses.

Police in Leeds continued their investigation of an Islamic book shop, the Iqra Learning Centre. Tanweer and Hussain both lived in Leeds, as did biochemist Magdy Mahmoud Mustafa el-Nashar, a former Leeds University instructor arrested in Egypt as part of the investigation.

El-Nashar reportedly has denied involvement in the London bombings, and Egyptian security officials have said the country is not prepared to hand him over to Britain.