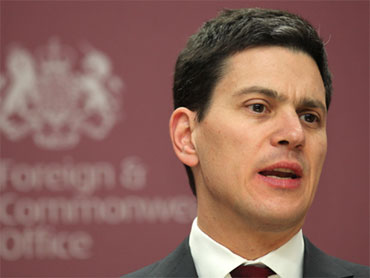 A British man abducted in Baghdad by armed militants disguised as policemen was freed Wednesday, alive and remarkably well after 2½ years in captivity, the British government said.

Computer consultant Peter Moore, who was handed over to Iraqi authorities Wednesday morning, is believed to be the only survivor of a group of five Britons abducted in a daring raid outside Iraq's Finance Ministry in May 2007. Moore was taken along with his four British bodyguards.

Foreign Secretary David Miliband said Moore, 36, was in good health at the British Embassy in Baghdad.

"I have just had a very moving conversation with Peter himself," Miliband said. He said Moore was "in a remarkable frame of mind" given his ordeal.

"He is obviously, to put it mildly, absolutely delighted at his release."

Miliband said Moore would soon return home to Britain. He said Britain had not made concessions to the hostage-takers, but would not say whether a deal had been done between the Iraqi government and the kidnappers. He said Moore's release was the result of the reconciliation process between Iraq's government and armed groups willing to renounce violence.

"It is the result of some very hard work on the part of the Iraqi authorities," Miliband said.

Moore's father, Graeme, said the family was looking forward to having him back.

"We are so relieved and we just want to get him home, back now to his family and friends," he said. "I'm breaking down, I'm just so overjoyed for the lad. It's been such a long haul."

Hopes for Moore's release grew after the militant group behind the kidnapping, Asaib Ahl al-Haq, or League of the Righteous, promised in August to lay down its weapons and join the political process.

The kidnappers had demanded the release of several Shiite militiamen held by U.S. forces, including the group's leader, Qais al-Khazali, in exchange for the hostages. Al-Khazali and his brother, Laith al-Khazali, were accused of organizing a daring attack on a local government headquarters in Karbala, Iraq, that killed five U.S. soldiers on Jan. 20, 2007.

In London, a spokeswoman for Britain's Foreign Office told The Associated Press that U.S. forces transferred al-Khazali to Iraqi custody on Wednesday, but denied that had anything to do with Moore's release. She spoke on condition of anonymity in keeping with her department's regulations.

In Baghdad a representative of al-Khazali's group and an Iraqi member of the negotiating team that helped secure Moore's release also said al-Khazali was transferred from U.S. military custody to Iraqi authorities, but said that happened about a week ago. Both spoke on condition of anonymity because they were not authorized to speak to the media.

Neither of them would say whether there had been a deal to free Moore, but said that Asaib Ahl al-Haq did not release Moore until it had confirmed that al-Khazali had been transferred.

Miliband called on the hostage-takers to release the body of Alan McMenemy, one of the four bodyguards kidnapped with Moore. British officials said earlier this year that they believed McMenemy, 34, was dead, but have yet to identify his body.

"We have believed for some time that he has been killed, and his family have been told our view of his likely fate," Miliband said. "I call today again in the strongest terms for the hostage-takers to return Alan's body as soon as possible."

The remains of the three other Britons - Alec MacLachlan, 30, Jason Swindlehurst, 38, and Jason Creswell, 39 - were returned to Britain earlier this year. It is not clear how they died, although both Swindlehurst and Creswell had multiple gunshot wounds.

"For Peter's family, the pain and the anguish is over. For the other families it endures," Miliband said.

British authorities have not said how they communicated with the kidnappers, but have received information about the hostages over the years.

A videotape showing Moore in reasonable health was delivered to the British Embassy in Baghdad in March, and British officials have said since then they believed he was still alive.