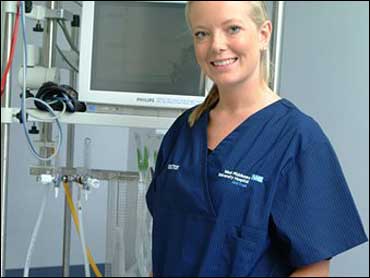 British hospitals are banning neckties, long sleeves and jewelry in an effort to stop the spread of deadly hospital-borne infections, according to new rules published Monday.

Hospital dress codes typically urge doctors to look professional, which, for male practitioners, has usually meant wearing a tie. But as concern over hospital-borne infections has intensified, doctors are taking a closer look at their clothing.

"Ties are rarely laundered but worn daily," the Department of Health said in a statement. "They perform no beneficial function in patient care and have been shown to be colonized by pathogens."

The new regulations would mean an end to doctors' traditional white coats, Health Secretary Alan Johnson said. Fake nails, jewelry and watches, which the department warned could harbor germs, are also out.

Johnson said the "bare below the elbows" dress code would help prevent the spread of Methicillin-resistant Staphylococcus aureus, or MRSA, the deadly bacteria resistant to nearly every available antibiotic.

Popularly known as a "superbug," MRSA accounts for more than 40 percent of in-hospital blood infections in Britain. Because the bacteria is so hard to kill, health care workers have instead focused on containing its spread through improvements to hospital hygiene.

A 2004 study of doctors' neckties at a New York hospital found that nearly half of them carried at least one species of infectious microbe. In 2006, the British Medical Association urged doctors to go without the accessories, calling them "functionless clothing items."

The dress code comes into force next year.