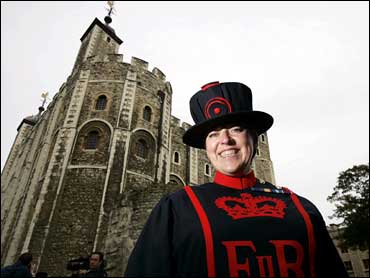 If the charges are true, it's time to add bullying to the litany of foul deeds committed at the notorious Tower of London, where three English queens were executed centuries ago.

Three "Beefeaters," or guards of the 11th-century royal fortress, are being investigated amid allegations of bullying in their ranks. Two of the three were suspended from duties on Monday.

The Tower said harassment was "totally unacceptable" among its staff, and the internal investigation should be finished within three weeks. "We take such allegations very seriously," the Tower said in a statement.

The allegations of bullying against Moira Cameron have sullied the ongoing effort to integrate women into Britain's traditionally male military bastions.

Tower spokeswoman Ruth Howlett said she could not confirm details reported Monday by The Sun newspaper, which said Cameron's uniform had been defaced and "nasty" notes left in her locker. The entry in online encyclopedia Wikipedia for the 44-year-old Cameron had also been tampered with, it said.

Police in London said a man was warned about violating the Communications Act because of "inappropriate use of the Internet" - an apparent reference to the Wikipedia entry.

The 35 warders who patrol the palace grounds on the banks of the Thames are popularly known as Beefeaters because of the meat rations they were given during medieval times.

The warders - all ex-military personnel - sport Tudor-style uniforms and guide visitors around the popular tourist attraction. They are now the only people living within the Tower, which was founded by King William I in 1066 and houses rare coats of armor and works of art, as well as the crown jewels.

There is a long history of bloodshed and treachery at the Tower, including the executions of three queens: Catherine Howard and Anne Boleyn, both wives of Henry VIII, and Lady Jane Grey, known as "the nine days queen."