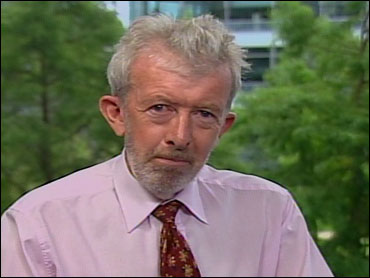 Police Constable Nick Barker has one of the cushiest jobs in British law and order. He patrols the pretty rural roads around the delightful little village of Halstead deep in the Kent countryside - south East of London - on a pushbike. If he spots a villain, he rings his little bell and pedals after them hell for leather. It is quaint. But it works.

Or at least it used to. Because Constable Barker has now been ordered out of the saddle and onto his flat feet. He has been riding a bike since he was so high, but his sin is that he hasn't yet taken the new two-day official Police Cycling Skills Course.

So the local officer now has to get about by bus or on foot. And every criminal for miles is laughing his head off. Britain's drug dealers are smiling too. New figures show that this country spends 8 billion dollars every year trying to prosecute drug crime.

Yet the illegal market just keeps on growing. 20 tons of heroin, 18 tons of cocaine, 10 tons of crack, 60 million ecstasy tablets and a massive 412 tons of cannabis changes hands here every year. Policing it is an expensive losing battle. Many of our drugs squads now use helicopters with infra red cameras to try to detect hot spots in houses that might conceal cannabis factories. Another good idea when it works.

The other night they swooped on a modern housing estate in the town of Lower Cambourne, near the university city of Cambridge. Dozens of officers moved in - preparing to smash down the first door. But, surprise surprise, it was answered by one of their colleagues -- yes, another police officer who lived there, and who explained that the houses were so badly insulated that they all looked like cannabis factories from the infra red eyes of police drug squad helicopters. Which only goes to prove that high tech methods will never replace reliable local policemen, preferably on pushbikes. This is Ed Boyle for CBS News in London.
By Ed Boyle