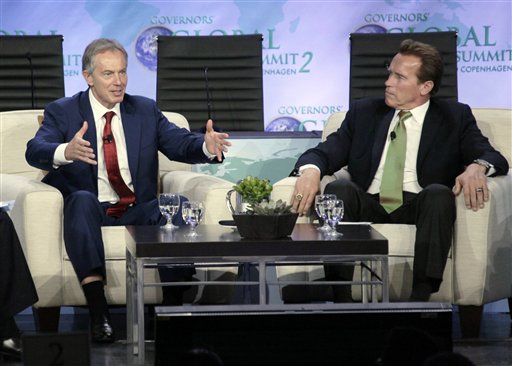 The former British prime minister may be coming back, this time in a presidential role. Two years after leaving Downing Street, Blair has emerged as a strong candidate for the soon-to-be-created post of European president.

The role _ in effect, the president of the European Union _ will be appointed by the heads of state of the 27-nation bloc after a new EU reform treaty is signed and ratified. That process received a major boost this weekend with approval from Irish voters.

The powers of the new position remain unspecified and to a large extent it will be defined by the first person in the role. A key question is whether that will be a largely unknown bureaucrat or a luminary like Blair.

There are already signs that Blair, 56, is receiving strong consideration, and he has the formal support of British leaders despite the long-standing rivalry between Blair and his taciturn successor, Prime Minister Gordon Brown.

Robert Worcester, chairman of the Ipsos MORI polling firm in England, said Blair's unannounced candidacy will be helped by his popularity in the United States and in continental Europe even though his standing at home is low.

"He's very, very popular in the United States and very popular in Europe, but not at home," said Worcester. "At home, he hasn't been forgiven for his support of the war in Iraq, for his saying there were weapons of mass destruction."

The position could be created as early as this month, although EU officials have given no firm date.

The youthful, articulate Blair became prime minister after a landslide victory in 1997 and served 10 years before he stepped down to quell a Labour Party revolt. He has traveled the world ceaselessly since leaving office, taking on an official role in the Middle East peace process while also teaching in the United States and giving lucrative speeches.

Unlike other candidates for the post, who tend to be lesser known European bureaucrats, Blair enjoys worldwide name recognition and is on a first-name basis with many world leaders, enjoying a celebrity status that would likely confer immediate credibility on the new post.

But Blair's candidacy for the job _ some British papers say his former chief of staff is working behind the scenes to muster support _ could alienate Conservative Party leaders who expect to take power at Britain's next general election, which must be held by June next year.

They don't like the idea of Blair rising, one more time, even as they prepare to administer the coup de grace to Labour leadership, which has stalled badly under Brown.

London Mayor Boris Johnson, a Conservative stalwart, Monday warned of a British backlash to the possible appointment of Blair.

He said many Britons would resent Blair "suddenly pupating into an intergalactic spokesman for Europe," without a public vote.

Other prospective presidential candidates are being considered as well, although they don't enjoy Blair's star status. Still, that may be preferable to European heads of state looking to appoint a figurehead who won't outshine them, or steal too much media attention.

The new president will be selected during private conversations among the leaders of the 27 EU nations without any public review.

The Lisbon Treaty, designed to boost Europe's voice on the world stage as it competes with the United States, Russia and emerging powers like China and India, also creates a top foreign policy position.

Anand Menon, director of the European Research Institute at the University of Birmingham said the new president is likely to clash with the foreign policy chief as they jockey for power in new positions with largely undefined powers.

"There seems to be a head of steam building up for Blair, but there is unease about him as well, because of Iraq, because of the euro, and because of his ambition, which some people see as a drawback," said Menon.

Some European leaders oppose Blair, Menon said, because he failed to make good on his early promise to bring Britain "into the heart of Europe" and did not adopt the European currency, the euro, or take other actions to join other European Union institutions.

Belgium, the Netherlands and Luxembourg have drafted a profile of the next EU president and are circulating it around EU capitals. Diplomats say it calls for someone with the "stature of a head of state" who is an ardent proponent of increased European integration, who has a broad world view and will listen to all 27 nations _ not just the big four.

Diplomats say Sweden, now holding the EU presidency, wants an early decision on the appointment of an EU president at the Oct. 29-30 EU summit in Brussels that Swedish Prime Minister Fredrik Reinfeldt will chair.

But that would only be possible if the Czech Constitutional Court has ruled on a complaint by some senators who want a review of the Lisbon treaty.