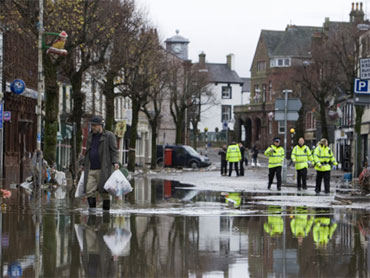 Residents of flood-battered northern England are struggling back to work, school and homes after swollen rivers inundated roads and caused several bridges to collapse.

Police said residents and business owners in the hardest-hit town, Cockermouth, would be allowed to return to their properties Monday.

Some of the heaviest rainfall ever recorded in Britain triggered floods in the mountainous Lake District last week.

More than 1,000 homes were flooded and people had to be rescued by helicopter when rivers burst their banks.

On Friday, Cumbria Police said Constable Bill Barker, 44, died as he joined rescue attempts. He was swept into the surging waters when a major bridge collapsed. Police and army experts are checking the safety of 1,800 bridges.

The Prime Minister also visited a flood relief centre in Cockermouth on Saturday morning and talked to people who had to leave their homes because of the floods.

In a message to local officials, Queen Elizabeth II said she was "deeply concerned and saddened by the dreadful flooding across Britain."

Britain's Met Office said a record 12.3 inches of rain fell in 24 hours in the area - the heaviest rainfall ever recorded in the United Kingdom.

Cockermouth, a market town 330 miles northwest of London, lies at the junction of the Cocker and Derwent rivers and is known as the birthplace of poet William Wordsworth.