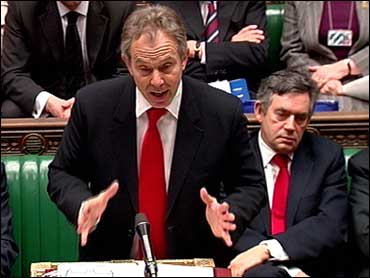 Blair's plan, which will cost $40 billion, survived a rebellion by lawmakers in his own party, winning by a vote of 409-161. Blair's Labour Party has a majority of 67 in the House of Commons.

Critics say the program could harm efforts to stem the weapons ambitions of Iran and other countries.

But Blair told the House of Commons before the vote that Britain's nuclear-armed submarines — due to be phased out from 2022 — should be replaced to meet possible future threats from rogue regimes and state-sponsored terrorists.

"I think it's right we take the decision now to begin work on replacing the Trident submarines, I think it's essential for security in an uncertain world," Blair said. "Though it is impossible to predict the future, the one thing that is certain is the unpredictability of it."

The government was supported by the opposition Conservative party. Former leader William Hague said that not renewing nuclear defenses would force Britain to depend on France and the United States.

"As far as we can see into the future, nuclear weapons will remain part ... of the global security setting. They will not be disinvented," he said. "This country has set a good example in the reduction of its nuclear arsenal. But we should not think for a moment that if we were to divest ourselves altogether of that arsenal, other nations would be likely to follow suit."

More than 90 Labour lawmakers voted against the motion, with others abstaining, rebelling legislators said, making it the biggest revolt since the Iraq war. In two debates over the Iraq war, Blair survived rebellions by 138 and then 122 Labour lawmakers.

Four members of Blair's government have resigned over the proposal, including lawmakers Stephen Pound and Chris Ruane, who announced their resignations Wednesday from junior government jobs.

The Labour Party abandoned its long-held policy of unilateral nuclear disarmament in the late 1980s, but significant numbers of party members continue to press for Britain to scrap its nuclear arsenal.

As the debate began, Labour lawmaker Jeremy Corbyn said the government's plan to replace the nuclear defense system is "contrary to the whole spirit of the nonproliferation treaty." Foreign Secretary Margaret Beckett shot back: "That is complete and utter rubbish."

Nigel Griffiths, who resigned a government role as deputy Commons leader on Tuesday so he could vote against the project, said he had concerns over both the price tag for the project and the message renewing Britain's nuclear commitment sends.

"We have led the world in decommissioning land mines, and nuclear warheads, and the world is watching us now," Griffiths said. "Let us lead the world for peace."

Protesters, including Bianca Jagger, singer Annie Lennox and designer Vivienne Westwood, gathered near the Houses of Parliament before the debate, and hundreds of protesters were outside in Parliament Square as lawmakers voted. Anti-nuclear campaigners say the Trident system could cost three times as much as the government's estimate.

"They are just like little schoolboys that don't think," Westwood said. "If (only) Tony Blair had any idea of his children's future — it's so dangerous."

Blair, who has announced he would step down by September, has said the country's stock of nuclear warheads, made up exclusively of submarine-launched missiles, would be cut from 200 to 160.

But the issue of replacing current warheads, expected to remain in service until the 2020s, will be considered in a separate debate sometime before 2009.