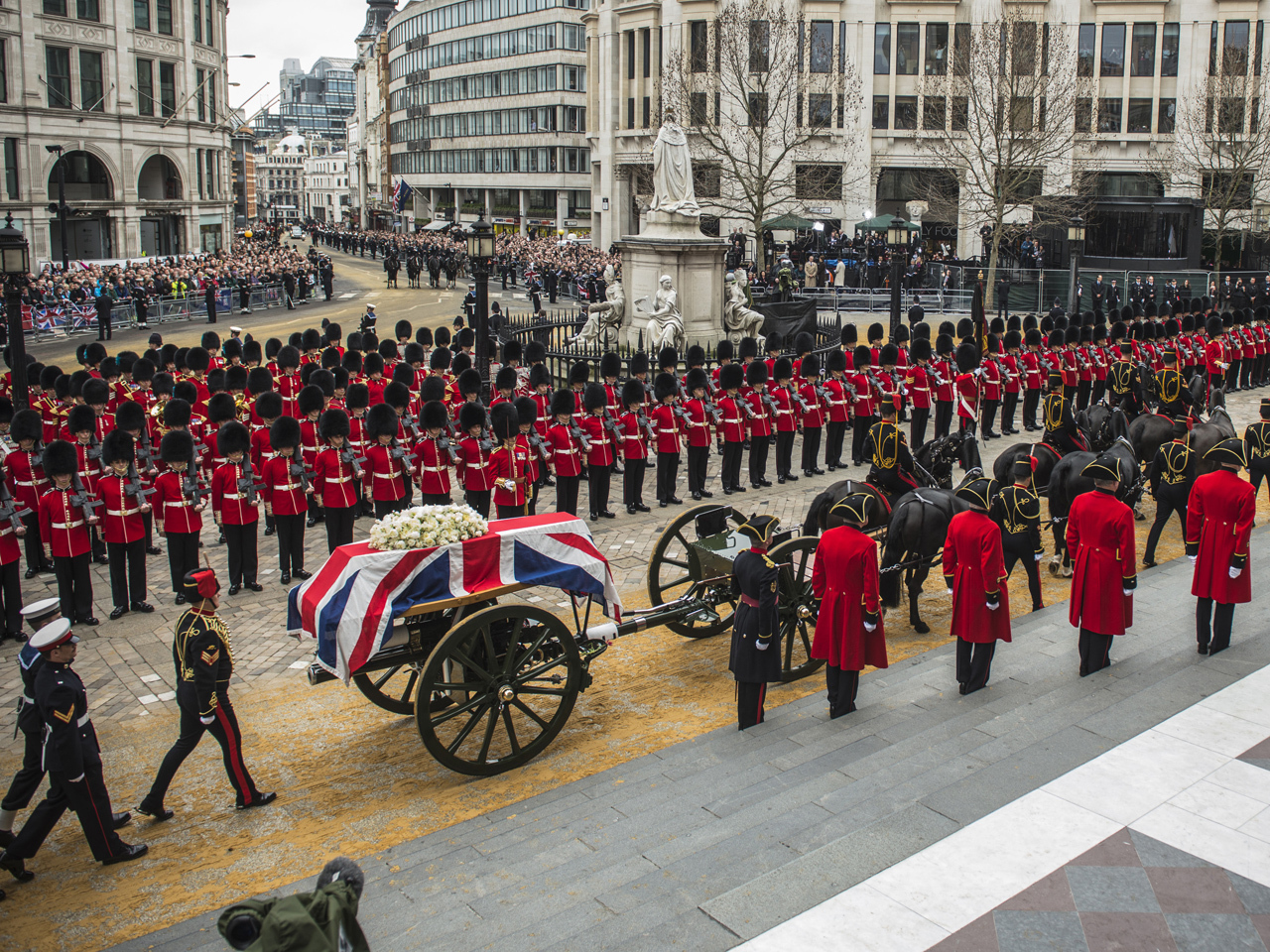 LONDON Margaret Thatcher, Britain's Iron Lady, was laid to rest Wednesday with a level of pomp and protest reflecting her status as a commanding, polarizing political figure.

Queen Elizabeth II, prime ministers and dignitaries from 170 countries were among the mourners at St. Paul's Cathedral, where Bishop of London Richard Chartres spoke of the strong feelings the former prime minister still evokes 23 years after leaving office.

"The storm of conflicting opinions centers on the Mrs. Thatcher who became a symbolic figure -- even an -ism," he said. "Today the remains of the real Margaret Hilda Thatcher are here at her funeral service."

"There is an important place for debating policies and legacy ... but here and today is neither the time nor the place."

More than 700 soldiers, sailors and air force personnel lined the route taken by Thatcher's coffin to the cathedral and around 4,000 police officers were on duty. Security was stepped up after Monday's bombings at the Boston Marathon that killed three people and wounded more than 170.

Spectators lining the route broke into applause -- and scattered boos -- as the carriage passed by, escorted by young soldiers, sailors and airmen.

Some clearly disagreed with the bishop's exhortation to leave politics at home. Some staged silent protests by turning their backs on Thatcher's coffin. One man held a banner declaring "Rest in shame." Arguments also broke out in the crowd along the route between Thatcher supporters and opponents.

The ceremony was traditional, dignified and very British. Mourners entered to music by British composers including Edward Elgar and Ralph Vaughan Williams, and the service featured hymns and readings chosen by Thatcher, who grew up as a grocer's daughter in a hard-working Methodist household.

There was a passage from T.S. Eliot, a section of Gabriel Faure's "Requiem" and the patriotic hymn "I Vow to Thee, My Country" -- also played at the 1997 funeral of Princess Diana.

The late leader's 19-year-old granddaughter, Amanda Thatcher, read a passage from Ephesians: "Stand therefore, having your loins girt about with truth, and having on the breastplate of righteousness."

It was a classic Thatcher image, capturing what people loved and loathed about a leader full of strength and certainty.

The dean of St. Paul's, David Ison, recalled "her courage, her steadfastness and her resolve to accomplish what she believed to be right for the common good."

Afterward, the crowd gathered outside cheered and applauded as the coffin was carried out to the half-muffled peal of the cathedral bells. Thatcher will be cremated, in keeping with her wishes.

Before the service, Thatcher's coffin was driven from the Houses of Parliament to the church of St. Clement Danes, about half a mile from the cathedral, for prayers.

From there the coffin -- draped in a Union flag and topped with white roses and a note from her children reading "Beloved mother, always in our hearts" -- was borne on a gun carriage drawn by six black horses from the Royal Horse Artillery to the cathedral.

The woman nicknamed the Iron Lady transformed Britain during her 11-year tenure from 1979 to 1990, privatizing state industries, deregulating the economy, and causing upheaval that's still felt. She died on April 8 at age 87.

Thatcher was given a ceremonial funeral with military honors -- not officially a state funeral, which requires a vote in Parliament -- but proceedings that featured the same level of pomp and honor afforded Princess Diana in 1997 and the Queen Mother Elizabeth in 2002.

That has raised the ire of some Britons who believe her legacy is a socially and economically divided nation.

"Like anyone else she deserves a decent funeral, but not at the expense of the taxpayer," said protester Patricia Welsh, 69.

But dozens camped out overnight near the 17th-century cathedral in hopes of catching a glimpse of Thatcher's flag-draped coffin and its military escort, and hundreds more arrived in the hours before the funeral.

"I came to commemorate the greatest hero of our modern age," said 25-year-old Anthony Boutall, clutching a blue rose. "She took a nation on its knees and breathed new life into it."

An honor guard of soldiers in scarlet tunics and bearskin hats saluted the coffin as it approached the cathedral, while red-coated veterans known as Chelsea Pensioners stood to attention on the steps.

Also present was retired teacher Henry Page, who stood outside the cathedral protesting the funeral's reported $15 million cost with a sign: "Over 10 million pounds of our money for a Tory funeral!"

Prime Minister David Cameron insisted the ceremony was "a fitting tribute to a great prime minister respected around the world."

Some high-profile guests did not attend, including former U.S. first lady Nancy Reagan -- whose husband Ronald had a close relationship with Thatcher -- and former Soviet leader Mikhail Gorbachev. Germany's Angela Merkel sent her foreign minister and the Clintons and the Bushes declined to attend.

Alicia Castro, Argentina's ambassador to the U.K., also snubbed her invite. Thatcher went to war in 1982 to retake the Falkland Islands after Argentina invaded the remote British territory off the South American coast.