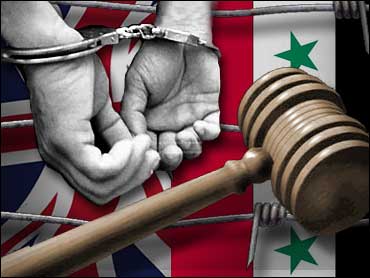 Three British servicemen will be tried before a court martial on war crimes charges for the inhumane treatment of detainees in Iraq, the government said Tuesday.

The troops face charges under the International Criminal Court Act 2001 in connection with the death of Baha Mousa, 26, a Basra hotel receptionist who died in Sept. 2003 after being arrested and taken to a British military base, the Attorney General Lord Goldsmith announced.

A spokeswoman for Goldsmith's office confirmed the charges were war crimes charges.

The three servicemen are among 11 British troops who face a range of charges in two separate cases arising from incidents in Iraq.

Britain has about 8,500 troops in Iraq, mostly in the generally peaceful Shiite south, where support for the Shiite-led government in Baghdad is stronger.

Earlier, this year the British military reduced the sentences of two soldiers imprisoned for abusing Iraqi civilians in a case that drew comparisons with the Abu Ghraib prison scandal involving U.S. forces.

Both were found guilty of abusing Iraqi civilians suspected of looting in May 2003.

Their trials in Germany focused on photographs taken of the abuse, which included dangling one man from a forklift. The photos provoked outrage in Britain, with Prime Minister Tony Blair calling the images "shocking and appalling."