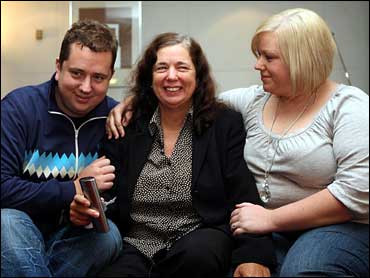 A British teacher jailed for letting her students name a teddy bear Muhammad as part of a writing project arrived home Tuesday after being pardoned - ending a case that set off an international outcry and angered many moderate Muslims.

"I'm just an ordinary middle-aged primary school teacher. I went out there to have an adventure, and got a bit more than I bargained for," she said at a brief news conference.

"I don't think anyone could have imagined it would snowball like this."

Gibbons, 54, jailed for more than a week, was freed Monday after two Muslim members of Britain's House of Lords met with Sudanese President Omar al-Bashir and the teacher sent the president a statement saying she did not mean any offense.

"I'm very glad to be back, and I'm a little shocked about all the media attention that I've been getting. I'm looking forward to seeing my family and friends and to have a good rest, and I'm hoping that you'll give me space in order to do that," she said in a statement she read to reporters.

"It has been an ordeal but I'd want you to know that I was well-treated in prison and everybody was very kind to me.

"I was very sorry to leave Sudan. I had a fabulous time there. It's a really lovely place, and I managed to see some of the beautiful countryside while I was there."

She said she found the Sudanese people to be extremely kind and generous and, until her jailing, had only a good experience.

"I wouldn't like it to put anyone off going to Sudan - in fact I know of a lovely school that needs a new Year Two teacher," she added.

Her son John and daughter Jessica went to the airport from their homes in Liverpool.

"I'd like to thank the government for all they have done, the hard work behind the scenes, especially the two peers who went out there. Everyone's been really great," John Gibbons said.

Gibbons smiled broadly as she was hugged by her son, and jokingly said to him, "That's enough affection for one day."

Al-Bashir insisted Gibbons had a fair trial, in which she was convicted of insulting Islam's Prophet Muhammad and sentenced to 15 days in prison, but the president agreed to pardon her during the meeting with the British delegation, said Ghazi Saladdin, a senior presidential adviser.

Gibbons was cautious about answering questions.

When asked her feelings about the offense she was accused of, she said: "I don't think I really know enough about it to comment really. It's a very difficult area and a very delicate area."

She added, "I was very upset to think that I might have caused offense to people."

CBS News correspondent Elizabeth Palmer reports a secretary at Unity High School in Khartoum, where Gibbons worked, complained to the authorities about the teddy bear, sparking the international row.

Last week, crowds of Muslim hardliners marched through the streets of Khartoum demanding that Gibbons be put to death for insulting the Prophet.

Gibbons said she learned of the intense media coverage of the story on her second day in prison.

Asked if she was terrified of prison, she said, "That's an understatement."

"I was in two different prisons," she added. I never actually went to the main women's prison, thankfully. The first one I was at was just like a downtown prison - like a lockup. I was treated the same as any other Sudanese prisoner in that you were given the bare minimum.

"Then I was moved to another prison and there the Ministry of the Interior sent me a bed, which is possibly the best present I've ever had."