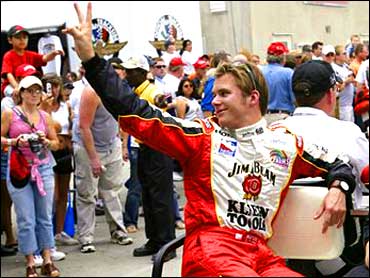 Wheldon took team co-owner Michael Andretti with him to Victory Lane, ending years of frustration for the Andretti family, which last got a taste of the Indy winner's jug of milk when Michael's father, Mario, won in 1969.

Wheldon is the first Englishman to win at Indy since Graham Hill in 1966. To do it, he had to overcome one of the greatest rookie runs in the 89 years of racing at the Indianapolis Motor Speedway, with the 23-year-old Patrick overcoming two big mistakes to lead the race with just eight laps to go.

"It feels as good as if I won myself," said Michael, who retired from the cockpit in 2004 after leading more laps at Indy than any other nonwinner.

Andretti gave all the credit for the win to the 26-year-old Wheldon, who now has won four of five Indy Racing League events this year.

"I'm just so happy for him," Michael said. "I think this is the first of many for him."

Wheldon, who said after winning the season-opener at Homestead, Fla., that his major goal in racing was to win Indy, was in tears after getting out of his car.

"This has been a dream come true for me. I've loved the Indianapolis 500 ever since I was a young kid," he said. "I came here and watched it for the first time in 1999. I'm having an emotional moment. I'm so proud."

Patrick, running out of fuel in the waning laps, held on to finish fourth, helped by a crash by fellow rookie Sebastien Bourdais one lap from the end. Wheldon ran out of fuel on his cooldown lap.

The best previous finish by a woman was 9th by Janet Guthrie in 1978. The story at Indy all month has been Patrick, only the fourth woman to race at Indianapolis, and Sunday was no exception.

After starting fourth and becoming the first woman to lead a lap at Indy on lap 57, she stalled the engine in the pits on her Honda-power Panoz on lap 79, falling to 16th, last on the lead lap.

Patrick kept her cool and moved all the way to eighth before making another mistake as the cars began to speed up for a restart after a long caution period. She nearly ran into the car of Scott Sharp, turning sideways and getting hit hard by fellow rookie Tomas Enge. Tomas Scheckter spun to avoid Patrick and slid into the inside wall.

Patrick was able to get her damaged car back to the pits, where the Rahal Letterman Racing team, which won the race last year with Buddy Rice, changed the nose and sent her back out on the lead lap. She made one more stop under caution on 159 to complete the repairs and got a full load of fuel on that last stop.

She came out 11th and moved up to eighth before the rest of the leaders pitted under a caution on lap 172, giving Patrick the lead again.

Wheldon caught Patrick and passed her on lap 186 seconds before Kosuke Matsuura crashed, bringing out another yellow flag. But Patrick had the huge crowd cheering when she passed Wheldon for the lead on the restart on lap 190.

"I thought for a second we were going to win that thing at the end," Patrick said. "When you've got to save fuel at the end you're not as quick."

As she tried desperately to conserve fuel, her speeds dropped from 226 mph to 221 and Wheldon shot past into the lead on lap 194. By the time Bourdais crashed on lap 199, both Vitor Meira, Patrick's teammate, and Bryan Herta, Wheldon's teammate, had gotten past.

Thanks at least in part to the mania caused by Patrick this month, as well as the nearly perfect weather Sunday, the empty seats that were visible in many areas of the vast Indy grandstands a year ago were filled. The crowd was estimated at more than 300,000.