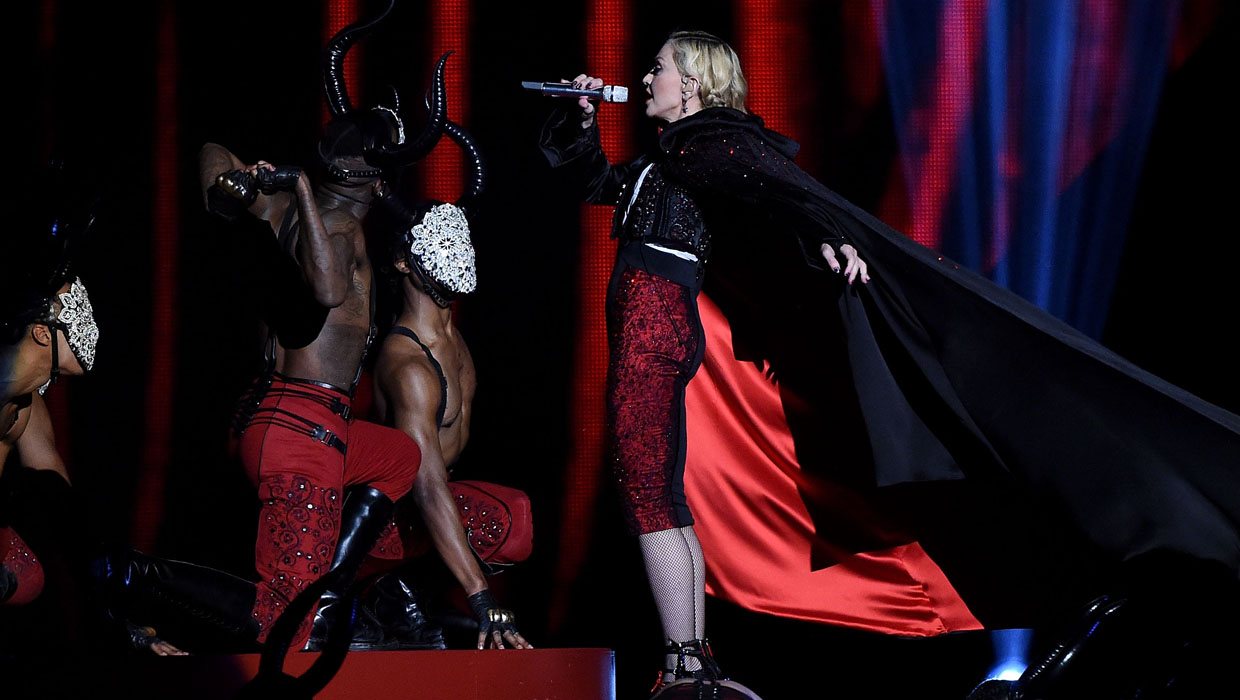 Sam Smith and Ed Sheeran each won a pair of prizes Wednesday at the Brit Awards -- but it took Kanye West to introduce some edge, with a song that proved too strong for television.

And Madonna gave Britain's leading music awards an unscripted moment when she took a dramatic tumble during a performance of "Living For Love."

The queen of pop, who entered wearing a long cape carried by dancers, fumbled with the garment and fell backward down several stairs during the song, which includes a lyric about stumbling. The song continues "I'm gonna carry on" -- and she did, continuing the matador-themed routine.

Afterwards, she posted on Instagram that her cape had been tied too tightly, but said: "I'm fine!"

Elsewhere there were few surprises at the awards, which recognize international stars along with homegrown British talent.

"Since I was a little kid I dreamed of people all over the world singing my songs," Smith said. "This shows I'm stepping in the right direction."

The 22-year-old Smith won four Grammys earlier this month, including record of the year for "Stay With Me."

Smith was sultry and Sheeran was sensible, but West provided a dose of raw energy. He performed his raw, grime-influenced new song "All Day," whose lyrics, peppered with expletives and the n-word, were muted for the show's live TV broadcast.

West has said his new clothing line was influenced by the 2011 London riots, and the performance also had an urban-unrest feel, involving dozens of dancers and a giant flamethrower.

It has been a big year for British music, with Smith storming the Grammys and artists like Sheeran, baby-faced singer-songwriter George Ezra and the still-ubiquitous One Direction making waves.

The Brits were once renowned for chaos, enlivened by incidents including a 1992 stunt in which British band the KLF left a dead sheep at the after-show dinner. But the ceremony has been transformed in recent years into a slick talent showcase.

West aside, the tone of the evening was accomplished but not edgy, opening with a sleekly saucy performance of "Blank Space" by a black-clad Taylor Swift.

Royal Blood singer Mike Kerr said the award was a surprise to the band, and possibly to the audience, "as you may not even know who we are."

The prize for best British female artist went to retro-loving singer Paloma Faith, who dedicated her award to "all the underdogs and all the grafters" who struggle to succeed.

Clutching a curvy white Brits statuette designed by artist Tracey Emin, Faith recalled how in her early days she had been arrested for putting up posters for her gigs. Now, she said, "my pictures are all over Greenwich Tube station legally, and that's an amazing feeling."

Winners in most categories are decided by a ballot of music-industry members, with some chosen by public vote, including a best British video award selected by online ballot during the ceremony. It was won by One Direction -- just like last year.