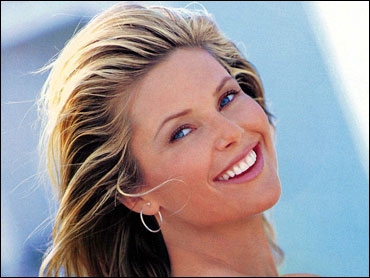 Christie Brinkley was a supermodel before there was such a word, and a large part of her popularity came through 20 years of CoverGirl ads.

With her blond hair, blue eyes and curvy-yet-athletic figure, Brinkley's all-American looks made her the perfect match for the all-American cosmetics company. The association began in 1976.

She went on to become the first model to appear on three consecutive Sports Illustrated swimsuit issue covers, in 1979, 1980 and 1981. She was married to pop star Billy Joel for nine years, appeared in several of his music videos, and was the inspiration for "Uptown Girl" and several other songs on his "Innocent Man" album, which was released while they were engaged.

Brinkley and CoverGirl parted ways in the mid-1990s, but it was an "amiable separation." Put it this way: she continued to use CoverGirl makeup, she said with a laugh in a recent phone interview.

When the company approached her earlier this year to rekindle their relationship, Brinkley didn't blink.

After all, it's fun work if you can get it, says Brinkley, who spent this day romping on the beach with her horse, dog and her two younger children, daughter, Sailor, 7, and son, Jack, 10, with the cameras rolling for the TV and print ads that break this week.

"We've been having a ball today. It's like a time warp. It's as if those 10 years between never happened," she says by cell phone from the shoot in the Hamptons on New York's Long Island.
Of course, what is different is that Brinkley is now 51 and she's pitching a line called Advanced Radiance, makeup intended for women 30 and older.

"There is such an age phobia in this country and this ad is showing me being comfortable with the age I am. I think it's a good, positive image, something you don't see enough of. ... CoverGirl is making an effort to show a wide range of beauty — different ethnicities and age groups," she says.

"Her public perception as a mother is very strong," says Andrew Sacks, president of AgencySacks, a Manhattan-based advertising agency that concentrates on the upscale market.

"People like her. There's not a diva association. For a very wholesome American brand, it's a perfect match," he adds.