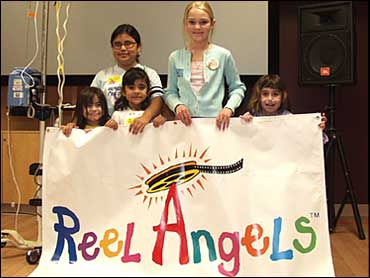 For many children, a night at the movies is one of the simple joys. But for youngsters in hospital cancer wards, it is a pleasure they rarely have a chance to enjoy.

Because of the threat of infection, going to a movie theater is not possible.

But CBS News correspondent Vince Gonzales met a young woman who has found a way to bring a bit of Hollywood to hospitals.

On The Saturday Early Show, meet Jessica Angel, the subject of this week's "Wonderful People" segment.

She got the idea after volunteering in the oncology ward at Loma Linda Children's Hospital.

Timmy Collins was battling leukemia when Jessica met him in 2003. The 5-year-old talked non-stop about his dream to see "Spiderman 2." But before the film's release, Timmy died.

"That was when I decided I wanted to do something about this, just find a way to bring movies to these kids," Jessica told Gonzales.

So she launched "Reel Angels," and brings not only movies to hospitals but snacks, a red carpet and, sometimes, the movie stars, too.

"It meant a lot that these guys would come down and do this," said Elizabeth, a 14-year-old cancer patient. "I know my siblings are going to be jealous."

Many young cancer patients are hospitalized for months at a time. Jessica says her goal is to bring them smiles and the magic of the movies.

Reel Angels has only been in business for a little more than a year but is already expanding its screenings to hospitals all over the country.