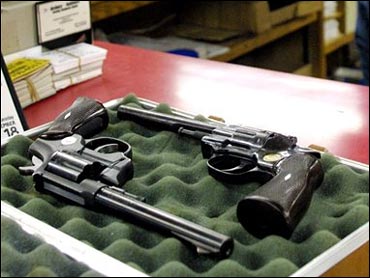 If you are reading this column at work, don't panic, but I do have troubling news: your right to bring a gun to work may be in jeopardy.

Yes, your capacity to defend yourself from that jerk in human resources may, just may, be going the way of the typewriter.

But there is something you can do to stop the march of wimphood and protect your Second Amendment rights: don't buy gas from Conoco.

Three years ago 12 workers at a Weyerhauser Co. paper mill in Valliant, Oklahoma were fired for violating the company's ban of having guns on its property, including the parking lot. The National Rifle Association led a crusade for justice. On June 9, 2005, according to an NRA press release, "Oklahoma Governor Brad Henry (D) signed into law today a National Rifle Association (NRA)-backed bill to prohibit employers from banning locked firearms in company parking lots." Phew.

But now ConocoPhillips and a bunch of other big employers in Oklahoma are being buttinskis and are suing to overturn the law, arguing they should have a right to control whether firearms are allowed on their premises, just like employers and businesses almost everywhere else in the country.

Well, rest easy, the NRA is not going to stand for that kind of anti-American, sissy stuff. They've organized a boycott of Conoco.

"Across the country, we're going to make ConocoPhillips the example of what happens when a corporation takes away your Second Amendment rights," NRA Executive Vice President Wayne LaPierre said. "If you are a corporation that's anti-gun, anti-gun owner, or anti-Second Amendment, we will spare no effort or expense to work against you, to protect the rights of your law-abiding employees. Their rights are worth more than your money!"

Wow. So far there seem to be a couple of big signs around Austin urging folks to stiff Conoco (and find oil companies that allow guns in their parking lots!). But I'm sure the boycott will get rolling real soon.

You can take further comfort in the fact that Kentucky passed its own "no employer gun ban" bill and so far it has been free of anti-gun, anti-gun owner or anti-Second Amendment meddling. And the NRA is trying to get laws specifically to keep guns in parking lots in Minnesota, Utah and Florida.

But I don't mean to imply that you should be lax in your vigilance. Do you know that you might not even be able to take a gun into a bar after work? Yep, it's true.

The wise legislature of Arizona passed a bill this year that would have sort of codified the perfectly obvious right to bring a gun into a bar or restaurant so long as you're not drinking. They agreed with the NRA's ironclad logic that, "Establishments that serve alcohol are not immune from life-threatening violence. Citizens deserve the opportunity to defend themselves and their families when they dine out." Duh.

Well, enter another buttinski in the form of Governor Janet Napolitano, who vetoed the bill. She apparently bought the inane nonsense spouted by the executive director of the Arizona Association of Chiefs of Police who said, "Guns don't mix with booze any better than driving has." Hard to imagine a man with a job like that just ditching his duty to protect his family with firearms in an eatery.

Luckily, one thing you don't have to worry about is Democrats on the national scene messing with gun control anymore. They've given up on gun control because they have special pollsters who tell them that's the smart thing to do to win elections. Look where that got them in 2004: second place in a presidential election in the greatest nation on earth. That's pretty good if you ask me. They walloped Ralph Nader.

So with the Democrats out of the picture, the House of Representatives is poised to approve the "Protection of Lawful Commerce in Arms Act" - another NRA-sponsored bill that would give gun makers and gun dealers legal protections from lawsuits unlike those any other businesses have. The Senate has already passed the bill and the president is sure to sign it.

I wonder if members of Congress can keep guns in their trunks at work.