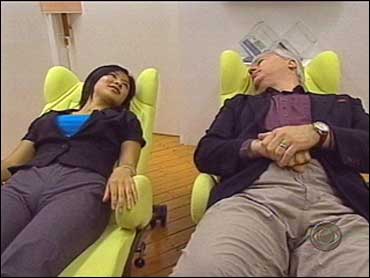 I'm Barry Petersen with this Letter from Asia.

When we Americans work, we consider it normal to put in an eight hour day, more or less. Not so in Japan, where they take pride in putting in long hours on the job.

Tokyo…where commutes are long and work often stretches across the weekends. Twelve hour days? Everybody's doing it. And sometimes death comes knocking. The Japanese call it…Karoshi…death from overwork…claiming roughly 150 lives a year. So the Japanese are embracing a new cure for stress that's really a very old idea…that's right, the nap…just like in kindergarten.

Welcome to the Napia salon in downtown Tokyo, where for about SEVEN bucks the harried can buy 20 minutes of peace and quiet and ease the stress of the day even if it's on the sly.

And it's not just grownups doing it. At this high school in southern Japan, nap time is as much a part of the day as physics.

We dropped into a company in downtown Tokyo where people routinely work through the noon hour…the work day can stretch to 10 hours or more and the coffee machine is always open. Worn out…tired…got the afternoon blahs? So step into what the company calls the nightingale room…

Natsuki Kikuya is a confirmed napper. "I used to drink 5 to 6 cups of coffee instead of taking naps but, it's just totally different. Really different," she says.

Let's not kid ourselves…this is really still about work and the bottom line. So in Japan, there are more and more companies where the boss might just be happier if he catches you napping on the job.
by Barry Petersen