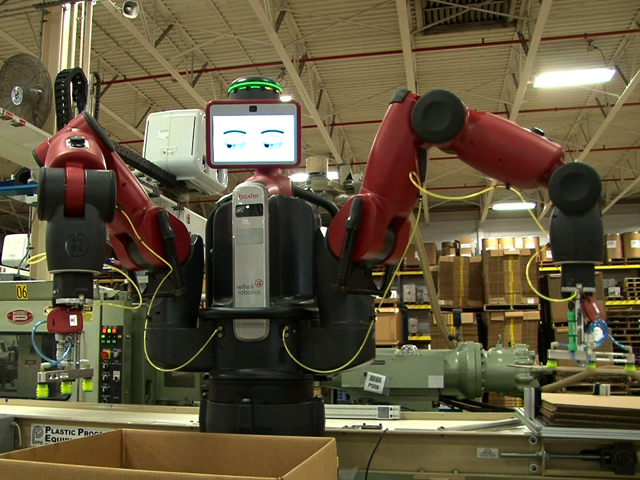 (CBS News) Payroll processor ADP says private businesses added 166,000 new jobs in September. In the future, some of those could be manufacturing jobs returning from places like China, thanks to a new piece of technology already working an assembly line in Pennsylvania.

Meet Baxter, a robot. Just seven months on the line, he's the newest member of the team at Pennsylvania manufacturer Rodon.

"Our people have really taken to Baxter," said Allen. "He's non-threatening. He's helping them do their job."

Baxter is designed to work safely alongside humans. Six facial expressions communicate status to human partners -- a raised eyebrow signals confusion if something's not right on the line. But most of time, Baxter works alone.

Slow but steady, Baxter toils on 24/7 without breaks or benefits. He costs only $22,000. And even with power and programming costs, Baxter is a $3-an-hour worker.

"He doesn't necessarily replace anyone," said Allen. "In fact, we need to hire skilled people to maintain and program those pieces of equipment. They just enable jobs to be performed more efficiently and therefore less expensively."

Baxter is part of the new factory floor: a cutting-edge mix of people and technology that has helped to reduce production costs enough to bring manufacturing back from China.

"So we're seeing now," said Hal Sirkin of Boston Consulting Group, "is companies bring jobs back to the U.S. Not just because of patriotism but because of pure economics. The wages are rising in China, the U.S. is getting more competitive. The average American worker is at least 3 times as productive as the average Chinese worker."

Sirkin said: "Had the automation not been put in place for a lot of these companies, we would have no jobs coming back to the U.S."

Three to 5 million jobs are expected to be returning to the U.S. by the end of the decade.