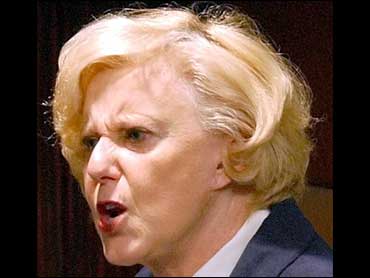 In another swipe at the French, a Florida congresswoman has proposed that the government pay for families who might want to bring home from France the remains of Americans who fought and died in the world wars.

"I, along with many other Americans, do not feel that the French government appreciates the sacrifices men and women in uniform have made to defend the freedom that the French enjoy today," Rep. Ginny Brown-Waite said in introducing legislation providing financial help for the reburial of veterans from the two world wars.

The legislation, which faces uncertain prospects, is the latest show of congressional frustration over French threats to veto a U.N. resolution that would open the way for U.S. military action against Iraq.

Lawmakers have also introduced bills to prevent France from participating in any postwar reconstruction projects.

Brown-Waite, a freshman Republican, said she decided to sponsor the bill after she was approached by a constituent who said he wanted to bring home his father, who was killed in World War II and buried in France.

Some 74,000 American war casualties are buried in France and Belgium, including 30,000 from World War I. The host nations, while retaining sovereignty over the burial grounds, have granted the land in perpetuity to the United States as military cemeteries.

Steve Thomas, a spokesman for the American Legion, said the veterans' group would need some time to look at the legislation. He said the American Legion has always respected the wishes of the families concerning those who died in combat, but noted that "a lot of people may not want to repatriate their fallen loved ones, separating them from their comrades, to make a statement about the French government."